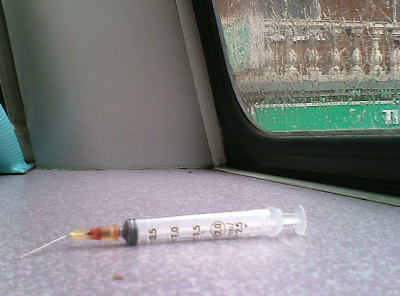 Police in Monmouth County say a Brick Township man left his three-year-old son in a car while he shot heroin in a gas station bathroom.

Officer Raheem Carter of the Ocean Township Police Department was on patrol last Thursday in the area of Route 66 near the Seaview Mall when he observed a suspicious car parked in the parking lot of a gas station, police said in a statement released Tuesday night.

After an investigation, police said they learned that John Broskey, 39, a Brick resident, had left his young son alone inside the car while he was inside the station’s bathroom using heroin. He was placed under arrest and transported to the Ocean Township police headquarters for processing.


The three-year-old boy was turned over to the custody of the boy’s mother after the New Jersey Department of Child Protection and Permanency was notified, the statement said.

Broskey was charged with possession of heroin, possession of a hypodermic syringe and child endangerment. Bail was set at $20,000 cash by Municipal Court Judge Louis Garippo. Broskey was unable to post bail and was transported to the Monmouth County Correctional Institution, Freehold, to await a future court hearing. He remained there Tuesday night, police said.