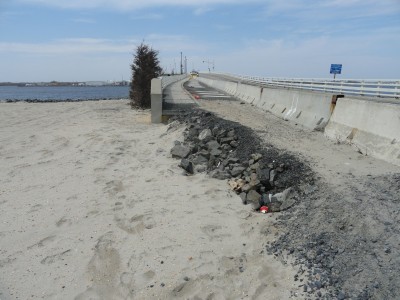 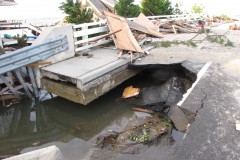 Ocean County will soon be making permanent repairs to the southeast side of the Manoloking Bridge following an ocean breach that occurred during Superstorm Sandy, flooding the bridge’s entrance on the barrier island side.

During the breach, which caused an inlet to form at Herbert Street in Mantoloking where the bridge is located, the bridge itself was undermined on its southeast side where it meets the roadway. Temporary repairs were completed in the weeks following the storm, but a house that was dislodged from its foundation prevented the county from making permanent repairs.


“Part of that concrete wall still has to be ripped out and rebuilt properly because there’s an entire void under there right now,” said Frank Scarantino, Ocean County Engineer.

The county has now received permission from the property owner to allow work crews onto private property at the foot of the bridge to make the necessary repairs, Scarantino said. The county’s work will take about two weeks while the overall repair project will take about 45 days. The bridge will remain open while repairs are being completed.

For the most part, motorists would not have noticed that the repairs to the bridge completed after the storm were temporary, but those who walk or bike over the bridge definitely would have.

“You start on the brick Township side and it looks normal, then you jog across and there’s nowhere to get off,” said Freeholder Director Joseph Vicari.

The freeholder board is expected to award a $310,013 repair contract to Earle Asphalt to perform the repairs. Scarantino said the entire project had to go through a federal review process, but as a result, the federal government will pick up 80 percent of the project’s cost.

A specific start date for the project has yet to be set.