Are we in for a snowy winter this year? The answer: maybe.

Predictions from the National Oceanic and Atmospheric Administration’s Climate Prediction Center were released Thursday, and they called for the northeastern U.S. to have a wetter-than-average winter season with temperatures hovering around average.

That means that while the chance is about one-third greater than normal for storms to develop, the chance of those storms bring snow rather than rain will fall into historical averages. That is in contrast to last winter, where average temperatures were far below normal in much of the northeast, including stretches of days where the mercury barely rose out of the teens.


“A repeat of this extreme pattern is unlikely this year, although the outlook does favor below-average temperatures in the south-central and southeastern states,” the National Weather Service said in a statement on the predictions.

Much of New York and most of New England will likely have warmer-than-average temperatures this winter season, the predictions said. New Jersey falls into the “equal chance” category, meaning that there is not a strong enough climate signal to make a prediction, so there is an equal chance for above, near or below-normal temperatures. 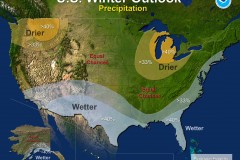 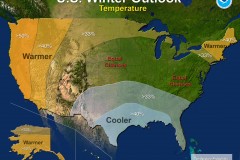 This seasonal outlook, federal officials said, does not project where and when snowstorms may hit or provide total seasonal snowfall accumulation forecasts.

“Snow forecasts are dependent upon the strength and track of winter storms, which are generally not predictable more than a week in advance,” the statement said.

There is also a chance that El Niño, an ocean-atmospheric phenomenon in the tropical Pacific that affects global weather patterns, may still develop this winter. Historically, the northeastern U.S. has trended warmer during years the pattern exists.