After Years of Work, N.J.’s Osprey Population At Record High 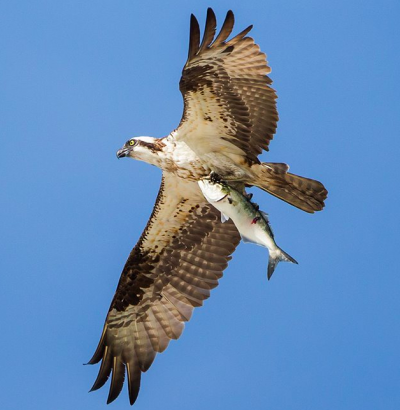 An osprey on the hunt in New Jersey. (Photo: New Jersey Osprey Project)

In a twist of irony that can simultaneously bring a tear and a smile to lovers of Barnegat Bay, New Jersey’s osprey population hit what may be a record high in 2014, the same year bay conservationist legend Paul “Pete” McLain and noted local veterinarian Dr. Stephen Wurst passed away.

The two men, as well as Wurst’s son Ben, were instrumental in helping the osprey population, once devastated by the effects of pest-killer DDT, rebound in New Jersey to levels that have not seen in years. The New Jersey Osprey Project this week said in 2014, 686 young were produced from 339 known-outcome nests, with 526 young being banded. The numbers represented an all-time high for the state’s osprey population.

When the osprey surveys started in 1973, there were only 53 nesting pairs. In 2013, there were 542. The surveys are undertaken by a dedicated group of state biologists and volunteers who scour the coastal areas of the state in search of nests. They target the most densely-populated osprey colonies from the Meadowlands to Cape May, and out west along the banks of the Delaware River.


Along the way, samples of each area are taken to see how the birds are doing, and nestlings are fitted with small bands provided by the U.S. Geological Survey so they can be tracked over time.

“Weather conditions this season were favorable for ospreys,” the report said. “Temperatures and precipitation were both average this summer. There were no significant severe weather events that ca used any large scale harm to them during the hatchling – nestling (under four week old) period when they are most vulnerable.”

The Barnegat Bay area of the state, including the Sedge Island management area off Island Beach State Park, had among the state’s largest number of ospreys in a given locale. There were 53 nests in the bay region and 25 in the management area along, which produced a combined total of 80 young. Of those, 57 were banded so they could be tracked.

Combined, there were 354 nests along the Atlantic coast and 53 along Delaware Bay.

The Barnegat Bay watershed, from Point Pleasant to Little Egg Harbor, is also home to a new banding system that seeks to engage “citizen scientists” to allow birders and wildlife photographers to identify the birds of prey over the long haul. The new band, which is a red anodized aluminum rivet band, bears an alphanumeric code which can be keyed in online after a sighting to provide data on dispersal, foraging habits, site fidelity, migration routes, and life span, the group said.

The annual report, penned by Ben Wurst, was dedicated to McLain and his father this year, he said.

“Pete is largely responsible for the recovery of ‪ospreys‬ to New Jersey, and my dad was a veterinarian for over 25 years,” said Wurst. “Besides caring for tons of domestic animals at his practice, Barnegat Animal Clinic, my dad really loved caring for exotic animals. These included many birds of prey that were ever injured and brought to him and his friend, Don Bonica, owner and operator of Toms River Avian Care. The legacy that they’ve left behind will never be forgotten. Please remember them when you see an osprey in the spring.”