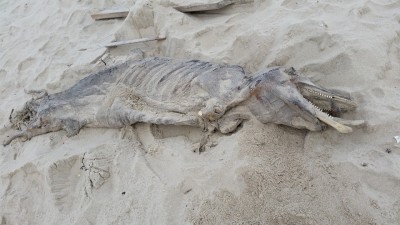 The carcass of a marine animal that washed up after the Dec. 9, 2014 nor’easter. (Photo Credit: Denise WIrth)

Locals are speculating as to the species of a carcass that was unearthed by the recent nor’easter and found Wednesday on a beach just north of Lavallette in Toms River’s Ocean Beach section.

Though it looks scary – almost prehistoric – many are predicting the experts will ultimately determine that it is the carcass of a mummified bottle-nosed dolphin. The remains were found Wednesday by Lavallette local Denise Wirth, who posted images of her find on social media.

Gregg Sakowicz, a research professor at Rutgers University who is locally known as “Professor Sak,” wrote on his website Wednesday that the mystery remains “appear to be common bottlenose dolphin,” but the Marine Mammal Stranding Center has been notified in order to confirm the hypothesis. 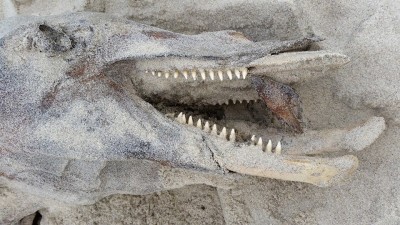 The carcass of a marine animal that washed up after the Dec. 9, 2014 nor’easter. (Photo Credit: Denise Wirth)

As to the animal’s odd looking state, Sakowicz said the appearance of mummification makes sense given the practices of the stranding center and how they deal with dead animals found on local beaches.

“If they judge a carcass to be too decayed to determine the cause of death or lack the resources to perform a necroscopy, the remains may be hauled off the beach or buried in place,” he wrote.

If those remains are buried in dry sand, the animal’s natural moisture may be absorbed and the carcass dried out and preserved, leading to a natural mummification, according to Sakowicz. In a storm where there is a good amount of beach erosion, such as Tuesday’s nor’easter, the remains can be unearthed by the tide and exposed.

If the stranding center makes a determination, we will post an update.