Brick Mayor: ‘No Tolerance’ On Sidewalk Shoveling Enforcement This Winter 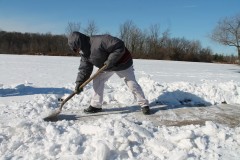 When it snows outside, make sure to shovel your sidewalks. You’re risking a potentially costly summons if you don’t.

Brick officials are taking a “no tolerance” stance on enforcing an ordinance that requires residents to clear snow off the sidewalk in front of their homes and businesses this year, Mayor John Ducey said this week.

“We are taking a ‘no tolerance’ approach,” Ducey said. “It’s something that needs to be done because a lot of kids need to get to school. We have to make sure that the sidewalks are all clear.”


The mayor made the statement after a resident who called in to his online radio show told him that portions of the sidewalks on Lanes Mill Road, a heavily-traveled route for students walking to Lanes Mill Elementary School and Brick Memorial High School, were not shoveled.

Ducey said in each of the recent winter storms, code enforcement officials have been writing summonses to those who have not cleared snow from their sidewalks, a reversal of a previous township policy that gave people 72 hours to remove snow.

“That’s really not acceptable,” Ducey said of the previous policy. “That’s three days, which means three days of kids walking out in the street.”

According to the township code, homeowners and tenants are required to remove snow “within 24 hours of daylight after the snow shall have ceased falling or after the ice has formed.” The only exception to the law covers those who live on cul-de-sacs or dead-end streets.

There is no specific penalty for the violation listed in the township code, rather, the penalty for violating the ordinance defaults to a general penalty, which is a fine not to exceed $2,000 or no more than 90 days of community service.

“It’s definitely unacceptable for any kids to be walking in the street just because of somebody who didn’t take the opportunity to shovel their sidewalks,” Ducey said.