Every Sandy Flood Insurance Claim Will Be Reopened, FEMA Pledges 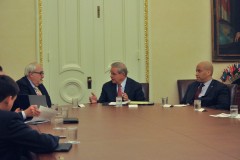 The Federal Emergency Management Agency will reopen and review all of the approximately 144,000 flood insurance claims made after Superstorm Sandy following a request from New Jersey’s and New York’s U.S. senators.

In a statement released Wednesday night, the four senators announced that FEMA would not limit corrective action to just the 2,200 currently in litigation. The announcement comes after the CBS newsmagazine program “60 Minutes” aired a report on engineering reports that were allegedly manipulated by insurance carriers after the storm in order to short-change victims.

“We had a very good meeting today with FEMA Administrator Fugate, who reaffirmed that the agency is implementing the comprehensive reforms we have demanded, including setting in place a process to reopen and review every flood insurance claim filed by Sandy victims who are not in litigation,” said Sen. Bob Menendez (D-NJ). “This is a significant turnaround for the thousands of Sandy survivors who have been victimized not only by the storm, but by FEMA, insurance companies and their subcontractors who systemically lowballed claims.”


New York Sen. Charles Schumer said that during the meeting, which also included Senators Cory Booker (D-NJ) and Kirstin Gillibrand (D-NY), the federal agency “acknowledged its failure to oversee a flood insurance program that cheated Superstorm Sandy victims out of much-needed funding to rebuild their homes.”

Fugate, during the meeting, said his agency would develop a process for all Sandy victims who are non-litigants, but believe their claims were unjustly denied or lowballed, to be reopened and reviewed; guarantee claimants gain access to all engineering reports; and contact by mail all Sandy claimants to make them aware of the new process and opportunity for review.

A task force will be formed in April to work on a number of reform measures, the statement said, and senior personnel changes are expected at FEMA.