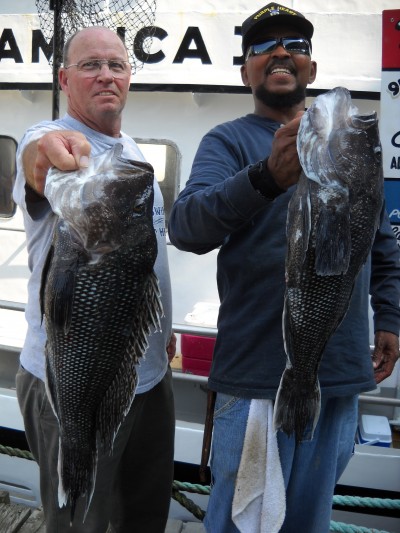 Thursday may not have been a picture-perfect spring day, with winds and occasional rain spoiling the party for anyone who ventured to wet a line, but a high temperature of 67 degrees was a step in the right direction for warming the waters enough for fish to start biting.

After the frigid winter, water temperatures are taking their time warming up. The ocean is still hovering around 41 degrees and the bay was a few degrees cooler, just a week after the winter ice sheet melted. The key, for those who want to catch fish, is to look to places where the water will be warmest this time of year. That means trying areas shallower than normal that are more easily warmed by the sun’s rays. In these areas, baitfish are more likely to congregate, which could, in turn, attract a striped bass looking for a meal.

“More reports of short bass are coming in each day from those fishing the back bay, Toms River and the power plant,” said Mario from Murphy’s Hook House in Toms River, in a report this week. “The winter flounder are are starting to be more active as well so get out there if you can before they are gone.”


In Brick, winter flounder are most abundant near the Mantoloking Bridge. The south side of the bridge works best. But most of the recent catches have been reported in the Toms River near the Island Heights docks. The winter flounder, unlike bass, aren’t going to be as picky about water temperature, and the cold could actually serve the keep them around longer this year than most. Baitfish were beginning to appear more active in the bay, with a school of bunker spotted near the mouth of the Toms River on Thursday, the staff at Murphy’s said.

Striped bass fishing was still non-existent in the suds, with most of the local tackle shops that cater to the surf crowd directing them to the bay instead, where there was at least some chance of hooking up.

Now, some bad news. The black sea bass fishery – yes, the one that is completely rebuilt, and not overfished – is having its recreational quota cut by one-third. I’ve opined on numerous occasions here and in the former Patch column on the gross mismanagement of this species, led by a National Oceanic and Atmospheric Administration that has been curiously hell-bent on regulating recreational sea bass fishing out of existence. Anglers sacrificed for years to preserve this fishery, and our reward is crushing regulations that not only limit us from fishing a species that remains active in our waters when others are not, but driving party and charter boat captains closer to bankruptcy as an important (nearly) year-round fishery is taken off the table.

With sea bass, the insanity of modern management schemes rears its ugly head. The fishery is doing so well that anglers exceed their quota, and thus face additional restrictions that will cause them to exceed it again the following year. The actual size of the stock, the fact that it is healthy and thriving, and the common-sense reasoning behind why quotas are being exceeded are (I would argue, purposely) disregarded to provide excuses for some in the federal agency to justify regulating recreational sea bass fishing out of existence.

That said, John Oswald at the Asbury Park Press reported Thursday on the management options the state will be stuck with. To paraphrase, the options include:

The first two options set the size limit at 12.5 inches. The third sets the limit at a staggering 13 inches.

As always, I welcome your tips, photos and reports. If there’s something major going on, we’ll do a special column during the week (a perk of being one’s own boss). Send them to daniel@shorebeat.com and we’ll make sure to feature it here.