Road Closures in Brick, Mantoloking to Begin Monday Due to Route 35 Project 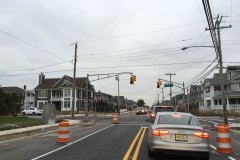 Officials have announced a number of road closures that will begin Monday due to the ongoing project to reconstruct Route 35.

The most significant closure that will affect Brick residents and commuters as a whole will begin Thursday, April 16, when the highway between Princeton Avenue in Mantoloking to Brick’s Curtis Point development will be paved during the day, with alternating traffic in effect. Likewise, on Friday, Osborne Avenue in Bay Head to Princeton Avenue in Mantoloking will be paved at night from 9 p.m. to 6 a.m., and all Rt. 35 traffic will be re-routed to the side streets with assistance from local police.


Downer Avenue in Mantoloking will also be paved on Monday, borough officials said. Residents and contractors will have to use Herbert Street to access areas north of Downer and Princeton Avenue to access areas south of Downer. Anyone wishing to go to the post office will have to use Princeton Avenue and park on Bay Avenue, then walk using the sidewalk.

The borough’s fire trucks will be parked on Bay across from the tennis courts. There will be no access onto Downer from Route 35, according to officials.