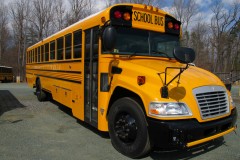 Shorebeat has learned that the union which represents the township school district’s bus drivers will hold an emergency meeting Friday to discuss a plan to lay off 31 drivers.

A letter from interim Superintendent Richard Caldes, obtained by Shorebeat, says a reduction of 31 school bus drivers is necessary for the 2015-16 school year. The necessity of the plan was determined during the 2015-16 school budget process “as well as an assessment of the Transportation Department’s overall structure and efficiencies,” Caldes’ letter said.

“The decision has not been an easy one but is necessary,” the letter went on the say. “Further communication will be sent when we receive word back from the NJ Civil Service Commission.”


The school district has been engaged in negotiations with Transport Workers Union Local 225, the union which represents bus drivers and other non-teaching personnel, including maintenance workers, custodians and mechanics. Earlier this year, the Board of Education hired an attorney to replace board members John Talty in negotiations since Talty was recovering from heart surgery at the time. Talty later stepped down from his board seat.

A dispute between school bus drivers and the district’s administration has been simmering for at least the last month, sources said. It has been rumored that the district’s transportation plan, which has not yet been released to the public, calls for some of the full-time driver to be replaced by part-time staff. In April, district Business Administrator Jim Edwards said the administration was considering contracting out private school bus runs for the Monmouth-Ocean Educational Services Commission.

A source said bus drivers have been using large amounts of accrued sick time in recent months as a protest, leading to some service disruptions, and were planning on doing so again Friday.

The letter from Caldes did not specify how much money could potentially be saved through eliminating the positions, though it was widely speculated that the savings would likely come from reducing the number of health insurance policies the district needs to maintain since there would be fewer full-time employees to insure. 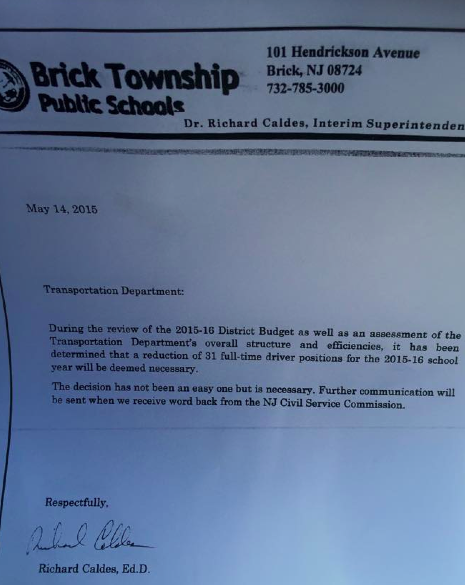