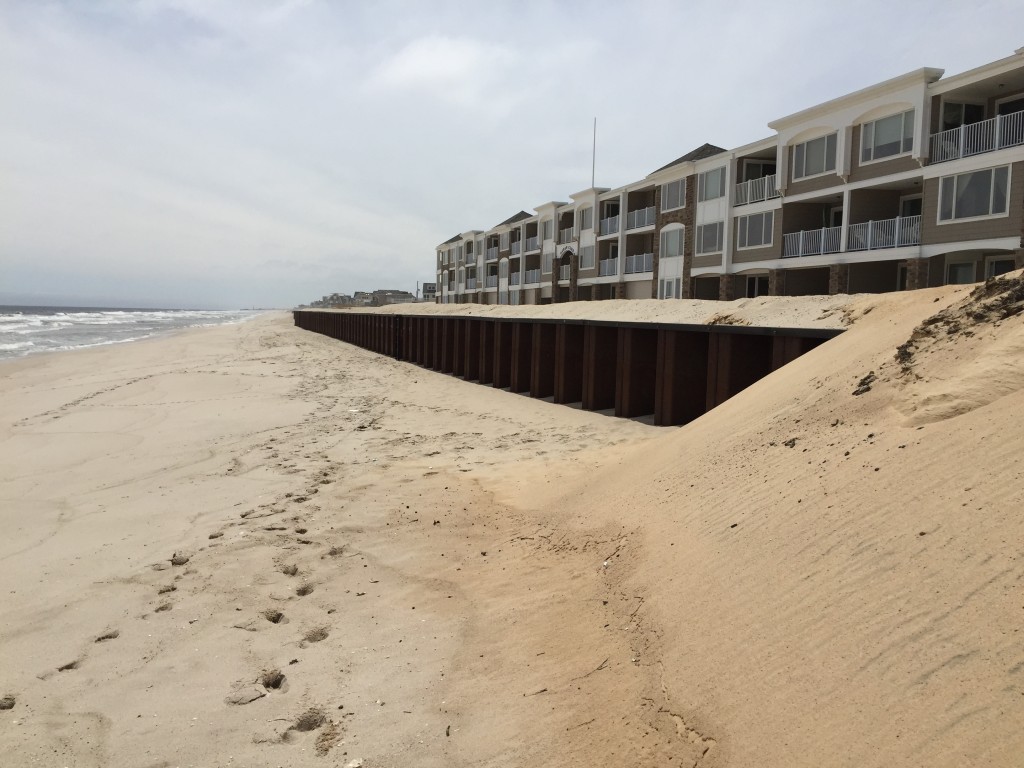 An up to six foot drop near the steel wall revetment at Brick Beach III. (Photo: Daniel Nee)

Brick Township will be responsible for funding deliveries of sand that will be needed to shore up the ocean beach in time for summer, DEP Commissioner Bob Martin said Thursday, though the state will be waiting in the wings should the township require logistical or monetary assistance in the future.

The sand deliveries are needed because the shoreline is eroding seaward of an oceanfront steel wall that was installed to protect the integrity of the barrier island and prevent breaches like the one that occurred in Mantoloking during Superstorm Sandy. The wall, essentially, is doing its job – keeping the ocean from eating away at the heart of the beachfront. But by now it was supposed to have been covered by a 22 foot-high engineered dune, anchored with vegetation, and buttressed by 200 feet of beachfront that was to be pumped onshore as part of a federal beach replenishment project. As the waves have lapped at the wall all winter long, it has created a six-foot drop in some areas, separating the bulk of the beach from the area where beachgoers would enter the water to take a swim. 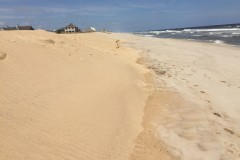 An up to six foot drop near the steel wall revetment at Brick Beach III. (Photo: Daniel Nee)

“We’ve been talking to both Brick and Mantoloking,” Martin said Thursday, at a press conference marking the start of a beach replenishment project on Long Beach Island. “They put money aside to put sand on it, and their responsibility is to keep that area covered with sand. We’ve told them that, if for some reason they had a problem, the state would assist them making sure it’s covered with sand for the summer.”

The replenishment project, which would end the need for sand in the area of the steel wall, has been delayed numerous times as the state has been unable to obtain voluntary easements to allow the dunes to be built on slivers of privately-owned sand in front of residential homes. Earlier this year, an Ocean County Superior Court judge ruled that the easements must be taken under the full eminent domain process rather than the state’s Disaster Control Act. A case involving Jenkinson’s in Point Pleasant Beach and non-cooperation on the part of Bay Head’s municipal government and homeowners have stalled the project that will construct larger beaches and protective dunes from Manasquan Inlet to Island Beach State Park.

Seaside Heights Mayor Bill Akers said Wednesday that he was told in a meeting held earlier this week that the start of beach replenishment on Ocean County’s northern barrier island is about six months away.

Meanwhile, in Brick, the cost of ensuring the steep drop is eliminated for the summer season will fall to local taxpayers.

“The towns are initially responsible for that cost,” Martin said. “Given the delays it’s taken to get the project started, the state will help out down the road if there just isn’t enough sand on top of it and they’re running out of money at the end of the day.”

At a township council meeting this week, officials voted in favor of paying an $82,194 bill for sand importation to the beachfront as the township readies the beaches for summer.

“It is being dispatched at different locations to provide safe access to the beach this summer for beachgoers and residents,” said Business Administrator Joanne Bergin. 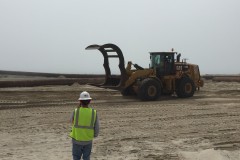 Martin said the state is now pursuing easements under the state’s traditional eminent domain process, starting with 49 that are still required in Long Beach Island.

“We really want them to keep moving along, we don’t want this project to stop,” said Martin, of the LBI replenishment effort. “They’re at the top of the list.”

In all, about 300 easements remain outstanding out of 4,200 that were initially required to be obtained for numerous replenishment projects coast-wide.