Fishing Friday: Bluefish Madness Up and Down N.J. Coast 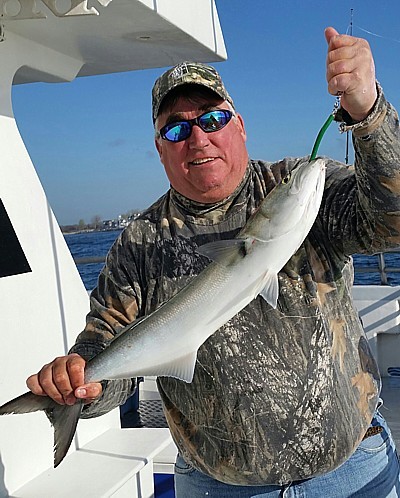 A customer on the Gambler party boat from Point Pleasant Beach shows off his bluefish. (Photo: Capt. Bob Bogan, Gambler)

If your Facebook news feed hasn’t been clogged up with photos of bluefish this week, you must not know many fishermen!

While striped bass are trickling in as the ocean water temperatures fluctuate between freezing and chilly, the blues have seemingly invaded our local waters en masse, appearing at the end of anglers’ lines cast into both the ocean and back bays.

“If there is water in front of you more than likely you’ll find blue fish in mixed sizes,” a fishing report from The Dock Outfitters in Seaside Heights said this week. “As for what to use, poppers, swimmers and metals are all working for the plug guys. The bait fishermen are using cut bunker and clams to score.”


Both the ocean and the bay fishing pier behind the shop are yielding blues.

As for bass, the folks at the Dock said their numbers are increasing as more baitfish make their way into local waters, though everything is contingent on water temperatures continuing to rise. A shot of cold water could certainly spook the fish into submission, at least temporarily.

“The back bay did well with the blues again last night before dark on poppers, swimmers and bunker chunks,” said Mario from Murphy’s Hook House in Toms River.

The blues slowed down a bit on Thursday but were still around. Meanwhile, there were a few reports of striped bass being caught on fresh clams. One customer, Adam Aquiar, weighed in a 25-pound bass that he caught fishing at Island Beach State Park on Tuesday. The fish was caught on bunker chunks.

The blues were likewise coming over the wall at Manasquan Inlet, according to the folks at Alex’s Inlet Bait and Tackle on Inlet Drive in Point Pleasant Beach.

If that wasn’t enough bluefishing reports for you, Capt. Bob Bogan on the Gambler party boat said he ran into them as well.

“Very good blue-fishing today, not far from our inlet,” he said, with the fish ranging from 5 to 12 pounds. “Didn’t seem to matter what lure you used.”

The Gambler is fishing daily, targeting striped bass and blues from 7 a.m. to 2:30 p.m.

In other news, the state certified a new blackfish record this week. The monster ‘tog was caught by Frank LaMorte of Mount Laurel and measured 25 pounds, 5.92 ounces, eclipsing the 1998 record by 5.92 ounces. The fish measured 33 inches in length and had a girth of 23 inches.

LaMorte was fishing off the boat Fishin’ Fever IV, captained by Tom Daffin and homeported in Cape May. The boat was anchored when Frank reeled in the fish. Frank was using a Star rod and a Shimano reel with 65-pound braided line. A crab served as the bait.

As usual, we’ll end with our invitation to share your catch photos with your fellow anglers who read this column. Feel free to send them over to me at daniel@shorebeat.com and we’ll make sure they get published!