A report from the Ocean County Medical Examiner’s office states a 22-year-old man from Yonkers, N.Y. suffered a seizure while swimming the afternoon of July 4, which contributed to his drowning death.

Apparently, John A. Crimmins, the victim, was an “avid surfer and a lifeguard,” said Al Della Fave, spokesman for the Ocean County Prosecutor’s Office. He was swimming with friends, however none of them realized he was missing until he disappeared from sight off the Lyman Street beach in Mantoloking, which is unguarded. 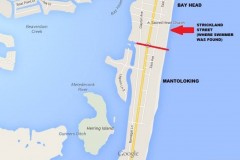 Crimmins’ body was found a short time later by lifeguards in Bay Head.


Crimmins had a medical condition which caused seizures, authorities learned, a fact that was confirmed by the medical examiner.

“The post mortem examination determined the cause of death is drowning; naming idiopathic epileptic seizures contributing to the event,” said Dr. Lyla Perez, of the medical examiner’s office.

The prosecutor’s office has officially closed its investigation, “and offers our heartfelt condolences to the family and loved ones of John Crimmins,” Della Fave said.