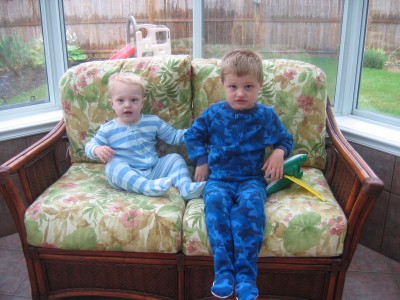 It was an everyday sight. A mom walking along with her eight-year-old and her twelve-year-old, strolling to the security gates of Great Adventure without an apparent care in the world. It would be nothing to write about, except the two children are autistic, one profoundly so.

And the mom is me.

Last Sunday I took a chance and took both boys alone to the amusement park we’ve been visiting since Justin was three. To say I did so without any hesitation would be a blatant lie. Despite the fact that we’ve been coming here for years and I’ve got our routine down to an A-type “T,” I worried. I worried that the lines to get into the park would be too long, and one (or both) boys would have a meltdown. I worried one of them would break ranks and run away from me as Justin once did in his quest for a beloved carb. I worried Justin would have a meltdown when I denied him access to Skull Mountain, a ride Zach has said, and I quote, he will “go on over his really dead body.”


No drama at all chez McCafferty.

But miraculously, we not only got through the day, it was all fun. Justin waited patiently in the security line when the family in front of us did not seem to comprehend (despite the two signs leading up to security telling them so) that selfie sticks are not allowed in the park. Zach completely understood why Mommy couldn’t bring three changes of clothes into Great Adventure, and that the water rides were out of consideration for the day. Justin didn’t freak out when we had to wait ten minutes for French fries (at least they were worth it.) We had fun. And I left the park with as many kids as I walked in with.

As I’m always one to contemplate things (hence my blog ideas) as we rode home together after three hours (!) at the park, I realized a few things. I’ve been holding back on trying things with the boys out of fear- fear of tantrums, fear I’ll lose one, etc. The truth is I’m always more comfortable with another adult along when we do an activity with the boys, and in some situation this will always be necessary. But the reality is that for the last year or two now, the boys “get it.” They like going places. They know they have to behave to go to them, especially when Mommy flies solo. For the most part, and this is after a decade of working incredibly hard with them, they are really, really good.

And it’s time for their mom to take some more chances.

I also realized something else, as my euphoria stayed with me all the way until 195 at which point my youngest started to whine, and the bubble popped. I am getting better about appreciating the progress we’ve made, acknowledging it, and sharing it with others. My Sunday sojourn to Six Flags would never have been possible even two years ago. This is a triumph to be reveled in, an accomplishment to be shared with families who like me at one time are wondering if they’ll ever have a peaceful moment in a car (or hell, maybe their house) ever again. Even with autism, even with severe autism, they do grow up. They do mature. In many instances things do get easier.

And my advice for any families with just-diagnosed children out there is to do your best, and know that whatever happens now does not always mean forever.