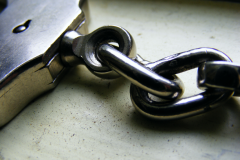 Brick police have arrested a township man and charged him with criminal mischief after an investigation showed he vandalized the Drum Point Sports Complex.

David Rivera Jr., 27, of Drum Point Road, is charged in the incident, during which police say dugouts, traffic signals, street signs and other property had been defaced by what looked like orange marker ink.  All the items that were defaced had a similar “tag” which was “King 718,” Capt. Ron Dougard said.

Police were first alerted to the vandalism on Monday when off-duty Lavallette class II special police officer Joe Bench called Brick police and told them he saw a man spray painting traffic light poles in the area of Drum Point Road. Bench gave a description of the suspect and officers responded to the area, though they were unable to locate the man at the time.


The following day, police were called to the sports complex numerous instances of graffiti and other vandalism, Dougard said.

At approximately 11:30 a.m. Tuesday, Detective George Waldhelm of the Brick Township Police Criminal Identification Unit observed a suspect matching the description from the previous day walking in the area of Drum Point Road and Brick Boulevard.  Detectives Kenneth Steinberg and Greg Mullarkey of the Brick Township Police Investigations Division responded to the scene and began working on the case, Dougard said.

Steinberg and Mullarkey were able to positively identify the man as the person who had committed the acts of criminal mischief the day before, and placed him into custody.  In addition, the marker that is believed to have been used was also seized, Dougard said.

Rivera was transported to Brick Police Headquarters where he was processed and released on one count of criminal mischief. Additional charges are pending review by the Ocean County Prosecutors Office, Dougard said.

The investigation is continuing and anyone who believes that they may have observed additional areas that were damaged is asked to contact Detective Kenneth Steinberg at 732-262-1113.  They can also contact the Brick Township Police directly at 732-262-1100.

A photo of Rivera was not released.