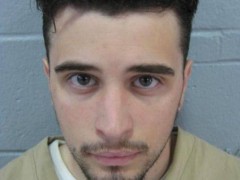 A Brick man who robbed the Gulf station on Burnt Tavern Road at knifepoint last September and stabbed the clerk has been sentenced to 15 years in prison, authorities said.

According to the Ocean County Prosecutor’s Office, Samuel Patriaco, Jr., 24, of Brick, pleaded guilty to first degree robbery June 19. The crime occurred Sept. 1, 2014. On that date, Patriaco approached Charanjee Singh, an attendant working at KD Automotive, also known as the Gulf station, while he was counting money at the gas pumps.  Patriaco grabbed the money out of his hand, and  when Singh attempted to retrieve the money, Patriaco stabbed him with a knife and fled.

The victim was transported to Jersey Shore Medical Center with serious injuries to his left upper abdomen and chest, where he recovered after undergoing surgery.

The investigation into the robbery was conducted by members of the Brick Police Department Detective Bureau. Ocean County Assistant Prosecutor Kelly J. Biringer prosecuted the case.

Patriaco must serve 85 percent of his sentence before being considered for parole.