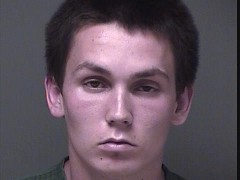 Brick police used a credit card stolen out of a vehicle in a township condominium complex to track down suspects in 10 car burglaries that took place overnight between Sunday and Monday and the fraudulent use of a credit card that resulted.

The burglaries occurred in the Sutton Village condominium complex off Sally Ike Road. Officers began taking reports of the burglaries – all of which occurred in vehicles that were left unlocked – at about 6 a.m. Monday morning.

Police charged Ramsey A. Jones-Moore, 23, of Briar Mills Drive, with credit card fraud after one of the victims called police later in the day Monday and said a credit card that had been stolen out of his car was used at several local stores, Capt. Ron Dougard said. Detectives Gregory Mullarkey, Daniel Waleski, and Thomas Cooney tracked the card’s usage and identified Jones-Moore as their suspect.


Jones-Moore was located by Mullarkey and Waleski as he was walking in the area of Van Zile Road and Route 70, Dougard said.   He was transported to Brick police headquarters where he was charged with fraudulent use of a credit card.

Jones-Moore was processed and released on a criminal summons with a pending court date.

As the investigation continued, Dougard said, the detectives identified Michael T. Wardell, 22, of Briar Mills Drive, as the man who entered the vehicles.

Wardell was located at his residence by the Brick Township Police Selective Enforcement Team and was taken into custody. He was charged Monday with theft and released from Brick’s custody on a criminal summons, but was turned over to the custody of the Ocean County Sheriff’s Department and transported to the Ocean County Jail in lieu of bail on an outstanding warrant.

Additional charges for Wardell are pending review of the case by the Ocean County Prosecutors Office, Dougard said.  The investigation is continuing and anyone who believes that they may have also been a victim is asked to contact Detective Thomas Cooney at 732-262-4708. They can also contact the Brick Township Police directly at 732-262-1100.

Editor’s note: An early version of this story (which appeared for about ten minutes) indicated the burglaries occurred over the weekend. They, in fact, occurred overnight between Sunday and Monday.