Brick to Acquire Parcel of Donated Land Behind Car Dealership 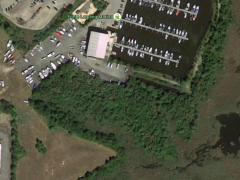 The site of a land parcel being donated to Brick Township. (Credit: Google Maps)

Brick officials voted this week to acquire a piece of land behind a township car dealership that will be preserved as open space.

The 6.9 acre plot is located behind the Circle Dodge dealership on Route 70. It is currently owned by Ryan Homes, the developer of the New Visions development behind the township’s post office on Chambers Bridge Road. Once known as Nobility Crest, the initial developer acquired the parcel to comply with the state Coastal Area Facilities Review Act.

State officials had required the builder to preserve wetlands in exchange for the allowance to develop the lot near the post office. The developer paid $13,500 for the plot.


“It’s a low-lying area, mainly wetlands,” said Council President Paul Mummolo, who toured the area with other township officials last week. Mummolo said the inspection was to make sure the area from free of debris.

The plot of land is assessed at $15,000 and receives a tax bill of $320 per year, Mummolo said. The minuscule loss of tax revenue, however, will be tempered by the township receiving credit for the preserved wetlands from the Federal Emergency Management Agency.

“By us taking this property, the site is a flood hazard area and will earn the township much-needed points for our CRS program,” Mummolo said, referring to the Community Ratings System program, which can lead to a reduction in residents’ flood insurance premiums. “It will benefit the town by taking it.”

A final vote and public hearing on the matter will be held at the next township council meeting.