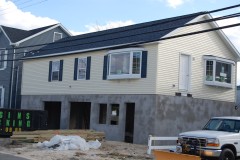 Brick residents whose homes were considered substantially damaged – meaning damage eclipsed half of their home’s value – in Superstorm Sandy have been receiving letters ordering them to bring their homes into compliance by elevating the structure, however officials say there are other options.

One resident who contacted Shorebeat said she feared losing her home since she could not afford to raise it.

“I’m going to be out on the street,” she said, asking that her name be withheld from publication.


The reality is that elevating a home is just one way to bring it into compliance. After the storm, those whose homes were substantially damaged were given three years to either repair their homes or elevate them to bring them into compliance with state laws. With the three-year anniversary of Sandy coming up, some of those homeowners have never submitted documentation to town hall indicating that repairs were made, thus proving their home was no longer substantially damaged, said Joanne Bergin, the township’s business administrator.

Homeowners were granted temporary, three year certificates of occupancy allowing them to remain in their homes while repairs were being made.

“The state is saying to us … you need to be following up on those substantially damaged properties that have not come in and gotten permits to elevate or brought in receipts, because they’re just kind of out there in this void,” Bergin said.

The state’s edict prompted the township to send out letters to property owners who have not been in touch with the town since their homes were declared substantially damaged. But township officials have also been worried that homeowners are selling homes that were substantially damaged without notifying the buyer.

Homeowners from numerous neighborhoods in town have reported receiving the letters, from those in lagoon neighborhoods to residents of the Seaview Village senior citizen community.

“Our concern is that people are selling these properties and not telling the buyers that the properties are substantially damaged,” said Bergin.

Elevating a home is one way to bring it into compliance, but so is submitting receipts that prove damage from the storm has been repaired, Bergin said.

“They have to bring in receipts and say, ‘I did all these repairs, let’s sit and do the math,’ said Bergin. “The options are very specific to what works best for you.”