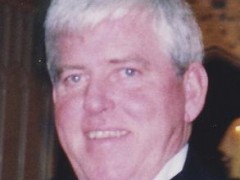 Chuck McCabe, who coached hockey at Brick Township High School for over 30 years alongside head coach Bob Auriemma, has died, it was announced Monday.

“Coach McCabe stood beside Coach Auriemma for the Dragons for over 30 years and was vital to the development of our program over the years,” said a social media post from James Murphy, BTHS Assistant Ice Hockey Coach.

McCabe’s viewing will take place Tuesday evening at 7 p.m. at Colonial Funeral Home, 2170 Hwy 88 Brick. Murphy said he and Auriemma are requesting that all players gather at 6:45 p.m. in the funeral home’s parking lot and enter as a team.


McCabe, 72, was born in Binghamton, N.Y. and lived in Wilkes Barre, PA before moving to Brick in 1965. He was an English teacher at BTHS for 39 years.

A Funeral Mass will be on Wednesday Aug. 19, 2015 at 9 a.m. at St. Dominic’s Church, followed by interment at St. Mary’s Cemetery in Lakewood. The McCabe Family is accepting donations dedicated to the BTHS Hockey Parents Club in lieu of flowers; donations may be sent to 294 20th Ave., Brick, NJ 08724.