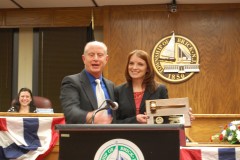 Susan Lydecker took her name off the ballot for Brick Township council Wednesday.

Lydecker, a Democrat who has served on the township’s governing body since 2012, will not seek re-election but will complete the remainder of her term, which ends Dec. 31, according to the local Democratic organization.

“Susan is a valued member of the team and will be missed,” Mayor John Ducey said. “She led the way on the Sustainable Brick Initiative, which used state and federal grants to make our buildings more energy efficient. Susan worked to rebuild our community after Sandy and to keep taxes stable for four straight years. It’s a record to be proud of.”


Lydecker served as council president in 2014 and was one of four Democrats seeking re-election in November in order to continue her party’s majority on the council.

“I’d like to thank the people of Brick for the opportunity to serve on Council. It’s been an honor,” said Lydecker, in a statement. “I’d also like to thank my family, my colleagues on council and the Brick Township employees who worked with me to make Brick better.”

The Democratic Municipal Committee will meet shortly to select a replacement candidate who will appear on the November ballot, party officials said.