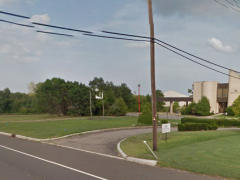 Route 70, near the intersection with Brick Boulevard. (Credit: Google Maps)

A 15,000 square foot QuickChek store that will include a gas station is being proposed for the intersection of Route 70 and Brick Boulevard at the site of the former Crown Bank building.

The township’s planning board will consider the plan, proposed by D&J Realty Corp., at a meeting scheduled for Wednesday night. According to planning documents, the site would occupy what is presently three separate lots on a plot of land that resembles a rounded-off triangle.

The QuickChek convenience store would occupy 15,496 square feet. The size of the gas station was not listed in a notice about the application before the planning board, though the notice said it would include a canopy and signage.

Locally, QuickChek operates a store with a gas station on Route 9 in Bayville, and a standalone store in Point Pleasant Borough.

The planning board meeting is scheduled for 7 p.m. Wednesday at the township municipal complex on Chambers Bridge Road.