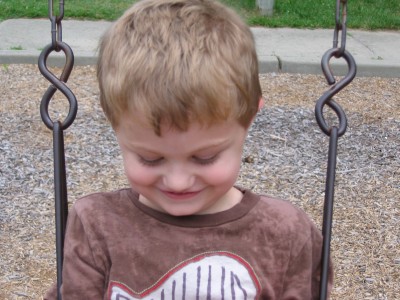 You may not be convinced that this is a victory, so I’ll give you the back story. Once upon a time Justin ate three things, and they were all carbs. At one point he decided food was the devil and ate, well, nothing. This prompted his desperate pareents to call in a BCBA (Board Certified Behavior Analyst) specializing in food issues and autism to come to our home, and over the course of a very unpleasant week our son began to eat again.

How any child of my body did not like food is beyond me.

A few years after “foodgate” we came to a crossroads with Justin, and realized we had to put him on a heavy-duty medication to help him quell his aggression. It was not a decision we made lightly, but the medication helped immensely, enabling the core sweetness of my son to dominate his days. Of course with any medication there lies the potential for side effects, and this one kicked in almost right away. It seems the child who had once deemed food beneath him would now eat anything in sight, and of course over time he gained weight, mostly in his belly.


Every few months however he would have a growth spurt, and the belly gain would redistribute over his new lanky length, and all would be well in the kingdom. As of six months ago, this was no longer the case.

Hence, my quest to make my son eat salad.

I channeled all those fancy (expensive) techniques our BCBA had tried years ago with success, and at first nothing worked. I put lettuce near his plate, which he happily handed back to me, until the day he just let it sit there.

Then, I got bold.

I tried it on his plate and at first he took it off, but eventually he let it lie. I next brought a small piece of lettuce to his lips, trying different dressings, and got rejected every time.

Until the day I tried oil and a fine virgin Balsamic vinegar (only the best for my boy,) and he opened his mouth and ate it.

Made an initial grimace of dismay, but he ate it.

Soon, the kid who’d live on pretzels and popcorn if I let him was not only tolerating lettuce on his plate, was eating it eagerly. I then replaced his mac and cheese and other carbs with the green delight both at lunch and at dinner, and watched my son become a herbivore.

I’m telling you this accomplishment is right up there with him reading a book out loud to me.

He’s lost seven pounds, my boy. Justin is his lean, tough, son-of-his-father self. He’s been eating “bunny food” for months now, and I think this dietary change is here to stay.

For any of you reading this saying “that’s nice, but not my kid,” that’s exactly what I was thinking this spring as I watched his pants grow tight. Sometimes we autism parents just have to try things, even when they seem impossible.

For once, “never say never” reigned.