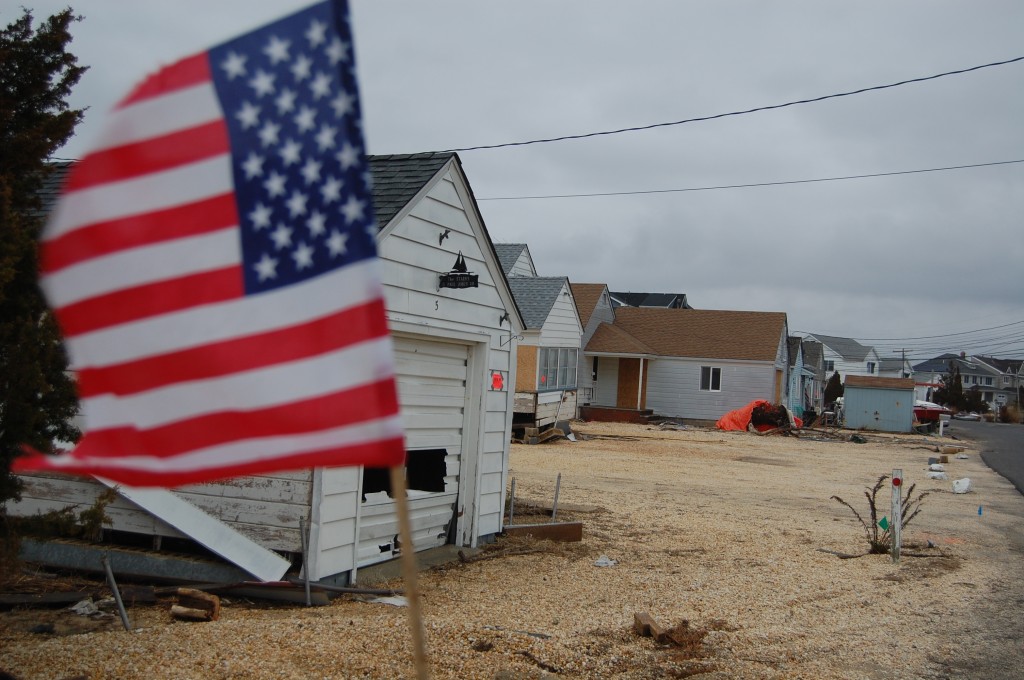 Since Superstorm Sandy struck in 2012, much has been made of the importance of dunes to protect the township’s oceanfront from breaching in a future storm, but comparatively little has been said about protecting homeowners on streets that are prone to flooding from Barnegat Bay and other waterways, such as Kettle Creek and Beaver Dam Creek.

That changed this week, with the release of four reports detailing flood reduction plans for four neighborhoods – three on the mainland and one covering the bay blocks of the barrier island. The mainland pl

ans were presented at a meeting held Wednesday night, while officials are planning a similar meeting on the barrier island in May.


Plans to reduce flooding are numerous and variable, comprising solutions that range from developing marshlands in such a way that they better absorb flood water before it reaches streets to physically raising the level of roadways in and out of developments that would be used as evacuation routes during storms.

“At one point, it’s no surprise, all of this was marshland,” where lagoon communities are now located, said Dave Roberts, a planner from Maser Consulting, who led a team that studied the four sections of Brick through a grant the township received aimed at finding ways to reduce flood impacts in future years. “Going back to the 1930s, there was no development at all, but by the 40s and 50s, the lagoons were starting to be dug out.”

Development has increased ever since, but not necessarily in a uniform fashion, providing both pitfalls and opportunities to improve flood preparations.

For the purpose of the study, neighborhoods were combined into four catch-all names. The barrier island was represented on its own report, while the Shore Acres report details that neighborhood as well as streets off St. Lawrence Boulevard and the Baywood section. Cherry Quay, Bay Harbor and surrounding streets were combined into another report, while the final report looked at flooding along the Metedeconk River and Beaver Dam Creek in the Princeton Avenue and Midstreams sections. Each of the reports are about 100 pages in length, and are “holistic” in nature, looking at overall quality-of-life items such as bike lanes and signage in addition to flood hazards.

The flooding issues, of course, are the primary focus of each report. The reports provide an immense array of background information and end with conclusions and suggestions on how to prevent future flooding based on scientific studies, engineering work and public input.

Additionally, the consultants agreed that the township should consider reconnecting the street grid between Shore Acres and Baywood, allowing for better accessibility during storm events and evacuations.

The report also said that, due to lot sizes which vary greatly in Shore Acres and surrounding neighborhoods, the township should consider amending its zoning ordinances to reduce side-yard and front-yard setback requirements to make it easier for homeowners to elevate their homes and provide proper access. The are around Angela Hibbard Park, the report stated, should have its zoning changed from R7.5 (requiring 7,500 square foot lots) to R5 (requiring 5,000 square foot lots) to better reflect the neighborhood’s layout and limit the number of homeowners who would need to obtain variances to raise or upgrade their properties.

Given the number of vacant lots in Shore Acres, the township should consider acquiring some of them to be used for water retention purposes that could double as public open space areas, the report said.

On some streets, bulkheads should be replaced by “living shorelines,” gentle slopes with vegetation, sediment, sand and small rocks, that can act as breakwaters and absorb some of the impacts of flooding. The living shorelines should be utilized where bulkheads exist that are not “directly protecting improved properties.” In these areas, the report found, the bulkheads exacerbate erosion and push floodwaters through storm drains, where a living shoreline would not only provide additional open space, but provide an area where the water could naturally flood without impacting roads or properties.

The suggestions contained in the Cherry Quay-Bay Harbor report largely mirror those of the Shore Acres report, with a number of specific suggestions.

For better access, the township should consider connecting the two sections of Seaview Village if the opportunity arises, the report states. Additionally, the report said that in Cherry Quay, Bay Harbor and the surrounding neighborhoods, special attention should be paid to utilizing all open space and conservation lands in a dual role to manage stormwater and provide public amenities.

“The neighborhood was built on former wetlands between four different tributaries at the head of Kettle Creek,” the report said, suggesting that the township – in approving new development or repurposing open space, should avoid asphalt and concrete wherever possible in favor of pavers, gravel or grass.

One are that needs to be “drastically improved,” the report states, is the catch basin pond in Cherry Quay. The pond, located on a square lot bordered by Port Road, Bark Road, Clubhouse Road and Boom Lane, is half-owned by the township.

“The plan, specifically, talks about the idea of making that a major project,” said Roberts, the consultant.

The township “should explore the engineering of placing outfall pipes from the catch basin to the lagoons with a bevel for one-direction flow,” the report suggests.

To reinforce the system and ensure that surrounding properties are not flooded by the catch basin, the area around the south-southeast of the basin should be raised, according to the report. Roberts said improvements to the pond should include cleaning debris out, opening up pipes that are filled in and creating a stormwater management facility on the property.

The plan for the Princeton Avenue and Midstreams sections of town, impacted by the Metedeconk River and, to possibly a larger extent, Beaver Dam Creek, calls mainly for enhancing and restoring wetlands so floodwater has places to go. The barrier islands that form lagoons in the creek “present a good opportunity” for enhancing wetlands because they offer a stable new environment for marshes to grow, according to the report. Wetlands should be extended farther into the creek and river, providing a larger area for floodwater to naturally collect.

“When you follow [Beaver Dam Creek] up far enough and see where flooding had occurred, there are opportunities where there are protected lands there where you could allow the wetlands to increase,” Roberts said. “The more you do that, the less water ends up on the streets.”

Also: “Near Windward, design an area that will invite floodwaters so flooding can be reduced downstream,” he said.

For the plan to come fruition, funding will be required, officials said.

For high-priority and low-budget items, the township could look into funding the improvements through its annual capital budget, said Tara Paxton, the township’s assistant planner. Several of the other measures suggested in the report could qualify for grant funding, a major driver behind the report’s creation.

“One of the main purposes of doing these plans is showing that we have skin in the game,” said Paxton. “When you have these types of plans to back up what you’re asking for, you score better on the grant applications.”

Paxton said the township had previous applied for a grant to improve the Cherry Quay retention pond but did not qualify for the money. Armed with the new report, the township will try again, she said.

The existence of the reports and plans also contribute to the township’s application to be included in FEMA’s Community Rating System, which scores municipalities that have put together solid plans to prevent flooding. The more points the township accrues, the more FEMA will discount flood insurance plans for residents of the township. Brick, which has never participated in the CRS program, is currently applying to be included.

“What we really focused on is what we can do better in the future, and how we can recover from that kind of storm event,” Paxton said.