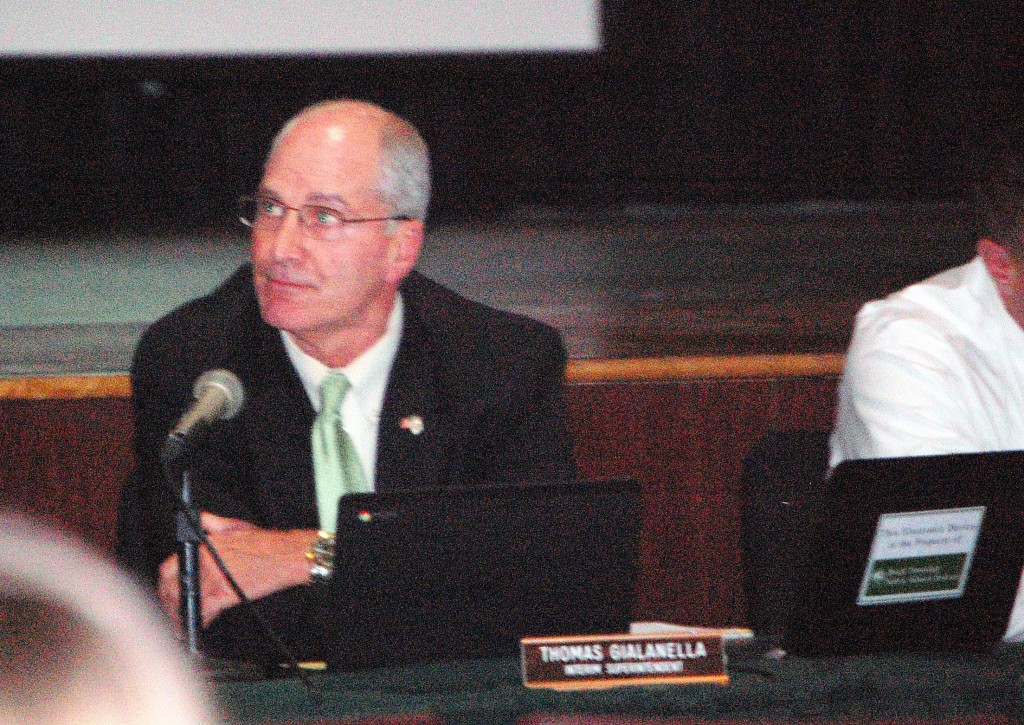 Numerous parents implored the board to keep Billen in his current position as principal of Midstreams, despite the fact that Interim Schools Superintendent Thomas Gialanella recommended the transfer to Veterans as one of a number of administrative transfers.


Francine Banick, a Coolidge Drive resident and parent of two children, including one now at Midstreams, beseeched the board, prior to their vote to table, to keep Billen at Midstreams. She said Billen has been instrumental in inspiring student success, parental involvement and high test scores.

To Gialanella, who was appointed interim superintendent in February, she said, “I don’t think five months in our district affords you the best judgment to make this recommendation.”

Gialanella said he makes his recommendations based on what is best for all the students in the entire district.

After the meeting, he declined to explain why he had not recommended promoting Colleen Kerr from assistant principal at Veterans to principal there. He said he did not want to “evaluate” any staff members publicly. He also said he hoped the board would make a decision on the matter at the next regular meeting on July 28.

Now that the board has tabled the vote, it can ignore it indefinitely, bring it up again at a future meeting or proposal an alternate plan.

The board also tabled a motion to promote Kerr to Midstreams principal because after tabling the motion to transfer Billen out of that position, they had to postpone promoting Kerr into it.

The vote to table the proposal to transfer Billen was not unanimous. Board Member Victoria Pakala voted against it and board member Sharon Cantillo abstained, saying she has a niece who teaches in the district.

When asked after the meeting why she voted against tabling, Pakala said she had served on the Human Resources Committee where she felt Gialanella kept her and committee members apprised of all the factors that went into his recommendations.

“I have confidence in the superintendent’s recommendations,” she said.

A number of personnel changes precipitated the proposal to transfer Billen. For example, Pakala explained, Brick Memorial High School Principal Jennifer Joseph is leaving her position to work as an administrator in the Neptune school district.

Gialanella’s position as interim superintendent was renewed in a separate vote at the meeting. He earns $682 per day for 260 days (the number of days are dictated by state statute, Gialanella said), bringing the total to $177,320.

Melissa Fornoro, a Midwood mother of three young children, including two at Midstreams, was one of many parents who raved about Billen and pressed the board to leave him where he is. She hinted that there is a problem at Veterans that Gialanella wants Billen to fix.

“If Dr. Gialanella, who makes over $600 a day can’t fix these problems, what are we paying him for?” she asked, getting one of the evening’s many rounds of applause.

Chatham Carter, who just graduated from Midstreams, also spoke in favor of Billen, who encouraged her as she started and became captain of a school book club.

“He made me feel like I could do anything,” she said. “He asked me to come back and help with the book club next year, which I’m super excited about. Please don’t move him to a different school. Use him as an example, but don’t move him away.”