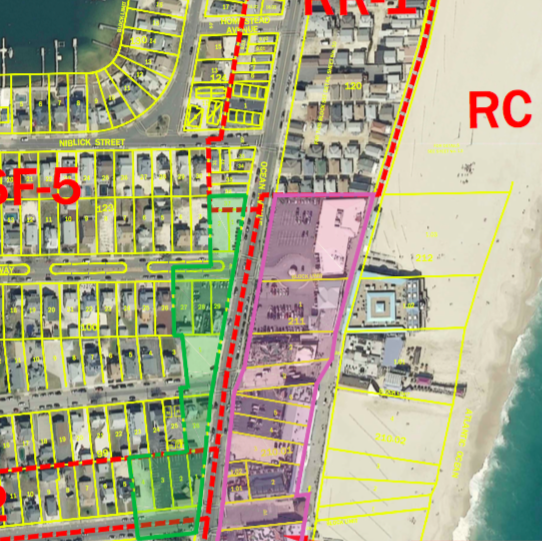 The lots were previous located in a residential zone, but thanks to the new ordinance, they will fall into a modified form of the Resort Commercial zone. Parking facilities will be allowed on the properties where, conceivably, the current owners could tear down buildings and use the space for paid parking. The rezoning runs along the west side of Ocean Avenue in the borough’s tourism district, from Arnold Avenue to halfway between Parkway and Niblick Street.

According to Borough Engineer Ray Savacool, eight of the 12 lots are already parking lots – they received licenses to operate when it was still legal for them to do so – and two others are businesses. The two remaining lots are residential properties. The rezoning was sought by the Storino family, which owns Jenkinson’s Boardwalk, but heavily opposed by some neighboring residents, who said opening up more parking will encourage more tourism at a time when Point Pleasant Beach cannot handle any more.


“What are we turning Ocean Avenue into? A big parking lot?” asked Kathleen Alfonse, a Curtis Avenue resident. “This town hardly has any green spaces. This town is crowded enough. How much more can we put on our policemen? We are overtaxing the town.”

Pat Storino, the principal owner of Jenkinson’s, said parking problems in the town “go back to 1930.”

“We are not trying to put more rides, or anything. We’re not looking to expand,” he said.

Storino said the primary reason his company asked for the ordinance revision is to the parking lot of Perk’s Cafe can be used as a paid parking lot after the restaurant closes at 2 p.m. Officials said the zoning change is necessary because case law now prevents the borough simply granting a permit to Storino to use the parking lot as a paid lot when the underlying zoning no longer permits it. Conceivably, other businesses along the Ocean Avenue strip could do the same, including the Offshore restaurant.

Some residents supported the plan, saying it would alleviate traffic woes in the one-square-mile town.

“By having these parking lots closer to the boardwalk and closer to the businesses, it’s going to keep people in that area,” said Kerry Anderson, another Curtis Avenue resident who runs an educational program at Jenkinson’s Aquarium.

The rezoning permits parking lots and retail businesses. Restaurants are a conditional use in the zone, however liquor sales are not permitted. The fact that new businesses could open up in the rezoned area led Councilman William R. Mayer to vote against it. Councilman Thomas Vogel said he was “not ready” to vote in favor of the ordinance because he felt the borough should hire a traffic consultant to take a closer look at the overall issue. Councilman Thomas Toohey said the ordinance would not alleviate parking concerns, and the “only appreciable reason” to vote in favor of it was because “the Storinos have been good neighbors.”

“And that’s not enough,” he said, casting a dissenting vote.

The remaining three council members – Tom Migut, Andy Cortes and Bob Santanello – all voted in favor of it.

A tie vote, under Point Pleasant Beach’s form of government, meant the mayor was tasked with breaking the tie. Without commenting, Reid simply stated, “yes” and the ordinance was passed.