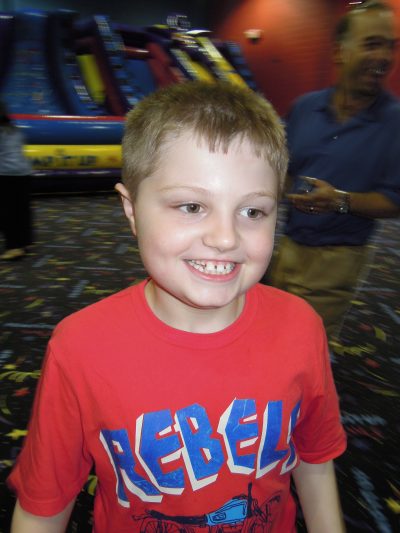 He grabs my arm with urgency, stopping me in the middle of washing a frying pan I didn’t really want to be washing anyway. He turns my entire body with his grip, eyes intently locked with mine, all business. When he sees he has my focus I hear the telltale sucking in of air that precedes all of his speaking attempts, and I wait to hear his sounds. What comes out is unintelligible to anyone not his parents, but I know he wants his “Clifford” CD for the computer, and he wants it now.

My severely autistic son, just shy of thirteen, is choosing to use his words over his communicative device.

His desire to get his needs met through syllables is relatively new, his attempts at speech ramped up since spring break. He does use his iPad to communicate what he wants, sometimes pressing buttons to sound out his requests, on occasion typing his words to summon what he wishes for. This bypassing of communicative devices at home is new, and his father and I welcome it, as we’ve been searching for speech for him for almost twelve years.


But if I’m honest with myself although he’s made progress, particularly in the last few years, most of what he asks for is only understandable to his mom and dad. And since we won’t be around to take care of him forever, that’s a problem.

Don’t get me wrong, the sounds are thrilling. We waited years and years to hear them, eagerly anticipated him breaking his tenacious silence despite years of speech therapy both in school and in private therapy.

But I’ll share with all of you that my focus has shifted over time from wanting him to communicate through speech to simply wanting him to have a form of functional communication at all. And that’s what we’re striving for both at school and at home.

So while I welcome the words we’re also trying to get him to use his Proloquo2go, and I work on his spelling with him weekly as well. The truth is while I try to remain in the present I always have at least one toe (or usually a foot) mired strongly in the future as well, and I often think about how he’ll get his needs met after we’re gone. His father and I have an almost uncanny ability to understand what he wants, but I don’t expect his caretakers to have those superpowers. Being able to read his mind and anticipate which DVD he wants to play next will not be listed as a job requirement for his lifetime care.

So I’ll keep pushing him.

Because I want to crawl inside his mind and understand his thoughts, his feelings, his wants, all that he has stored up there that his neurotypical parents aren’t able to discern.

Because someday we won’t be here to anticipate his wants, and he’ll need a more functional way to communicate his needs.

Because I love him to the moon and back, and want him to be his best self, to be as independent as he can be.

Because learning to take care of his own needs has become my new barometer for his success- not how many ABA trial he completes with 80% accuracy, and not how many intelligible words he emits.

Because that brave, beautiful brain has so much to share.

So his entire tribe will keep pushing him, not to his breaking point, but just to see how far he can go.

And I believe that will be very far indeed.