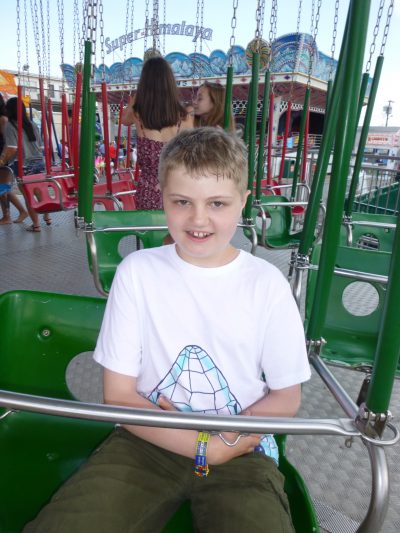 I struggle out of sleep, not knowing what woke me up but for once knowing it’s not my own body. I lie still for a few moments, and then I hear a thud, and I’m instantly awake and throwing back the covers.

Justin’s OCD is back. He’s quite loudly rearranging his room at 6:10 in the morning, and there aren’t words to explain how much I don’t want his brother up at this hour.

That means I have to move fast. His rocking chair is next.


My eldest son has a dual diagnosis of autism and OCD. The only reason he really has a secondary diagnosis is due to the extreme level of perseveration he will sometimes go to, an intensity which transcends his primary diagnosis. Justin’s OCD has manifested in many diverse and interesting ways. Sometimes it’s rearranging furniture, which has at times improved the look of a room. During one particularly gruesome period he hid things, including shoes and my purse, which half the time I didn’t even know they were missing until I desperately needed them (at almost fifty I depend upon my visual cues). This last arc, which has lasted a year-and-a-half despite behavioral interventions and tinkering with his medications, was relieved for a few months when we seemed to hit the right one, and our happy boy came back.

And unfortunately, his penchant for angling and arranging has returned in half force.

The first piece of good news is that we have loads of room to increase his new medication, and since it’s been effective for the last few months I have hope that this change will help him. In case you’re thinking that moving a few things doesn’t sound so bad, I have to share with you that truly, it is. Justin not only wants to rearrange things, he wants to angle items in such a way as to defy gravity, and when he can’t transcend the laws of physics he becomes very upset and agitated, refusing to engage in more acceptable pursuits (or hell, sometimes even get on the bus).

And in those moments, I am pissed as hell at autism or OCD or whatever neurological disconnect is causing my boy so much pain.

The second piece of good news relates to me, or specifically how I am handling this unwelcome resurgence. Even a few years ago I would have despaired that we wouldn’t be able to help him, been sent to the abyss where he suffers and hell, frankly we all suffer along with him.

But over the last few years as I’ve seen problem after problem rectified with Justin, I’ve learned how to keep a little piece of hope alive.

Over the past thirteen years we’ve conquered potty training and insomnia. We’ve gotten him out of a hunger strike, and later on taught him to like lettuce (my greatest lifetime achievement) and reduced his caloric intake so he could lose a few of those carb pounds. We’ve (mostly) quelled his aggression, and worked out ways to stay at relatives’ houses and outing for more than forty-two consecutive minutes.

We’ve been quite busy chez McCafferty.

And what I’m able to do now that I wasn’t able to do a few years ago is draw upon those accomplishments and remember that many things are not permanent with Justin, that just like typically developing children he will grow out of some things (learning to sleep remains my personal favorite) and do it in his own sweet time.

This optimism doesn’t necessarily mean we’ll be able to conquer this latest challenge with our boy. Increasing the medication might not work, or the side effects of a higher dose might counteract the benefits.

As they say, it ain’t over til it’s over.

But something I’ve learned over the past decade plus with autism (and perhaps parenting in general) is that a good portion of the battle is my attitude. If I can summon up some modicum of optimism (and I will share with you all that this doesn’t happened in the middle of the night, I have my limits) I’m often more open to finding strategies to help my kids, and even if those strategies don’t end the issue, they can often alleviate it.

And frankly, being in a bad mood all the time just sucks. This is the happier option.

Know that I have my moments and everything I’ve just written gets thrown out the window on a day where I struggle to get my son out of his room so he can (thank you God!) go to school, go to the bathroom, or eat. In those moments I try to summon my “teacher patience” which is often more powerful than my “parent patience,” take a deep breath, and remind myself that he’s never completely refused to get on the bus despite whatever feng shui endeavor he’s attempting.

In other words, I’ve gotten really good over the years at deep breathing.

And my message for anyone just starting out with an autism diagnosis, or anyone at a particularly difficult juncture with the disorder, just remember this. No one can promise you it will get better. But the resources out there for helping our kids are so much better than they were even a decade ago that it’s worth a shot at carrying that hope with you for a while. And while you’re trying to help your kid, make sure you take care of yourself too.

I’ll say it again. Make sure you take care of yourself too. No one will do it for you. Try to recall what you’ve already conquered. Ask for help from anyone and everyone. Don’t give up.

And remember to breathe.