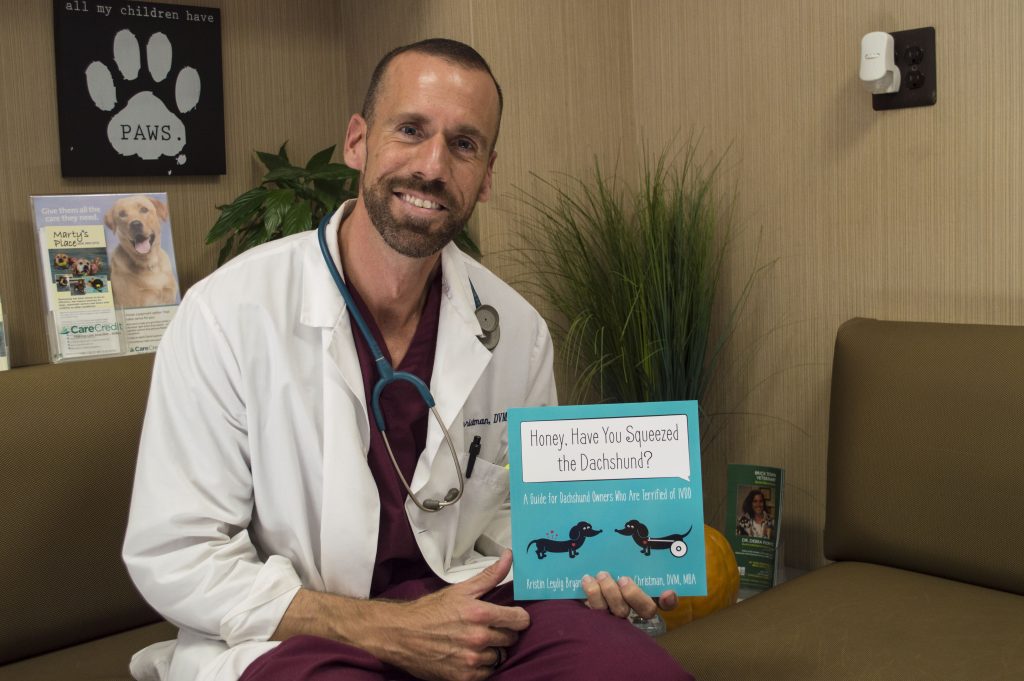 Cosmo was a two-year-old dachshund when he unexpectedly became severely injured while chasing a squirrel in his owner’s yard. To his owners’ surprise, they were told when they visited Brick Town Veterinary Hospital that Cosmo would likely be paralyzed for the rest of his life.

“He ruptured a disc” said Dr. Adam Christman, a veterinarian at the practice, who would go on to adopt Cosmo after his owners decided they could not take care of him.

The dog suffered from IVDD – Intervertebral Disk Disease – which can manifest itself in varying injuries to a canine’s intervertebral discs. It is most commonly seen in long-bodied breeds large and small, from English mastiffs and German shepherds, to Bassett hounds, dachshunds and corgis.


Christman and a partner, Kristin Leydig Bryant, wrote their new book, “Honey, Have You Squeezed the Dachshund,” to fuse together important information about IVDD with lighthearted stories of dogs (and owners) who enjoy a happy life despite what can be a debilitating injury. The book takes its name from a ritual Christman undertakes every night with Cosmo – squeezing the dog’s bladder because he is unable to urinate on his own.

A lifelong Brick resident who worked part-time as a technician at Brick Town Veterinary Hospital while he was attending Brick Township High School, Christman returned to Brick after attending veterinary school and became a self-confessed “dachsy-holic.”

For many dog owners whose pets face serious health issues, worries run deep, he said, from making sure a pet isn’t in pain, to financial burdens, to facing the fact that they may have to give up their best friend.

“I think the biggest concern is quality of life,” Christman said, explaining that dog owners act similarly regardless of the diagnosis or condition.

“They ask, ‘is this something my dog can survive from,’ or manage?” he said. “It is a big diagnosis to hear as an owner, that your dog might be permanently paralyzed, or could be blind permanently. It’s scary to hear that, and as a veterianrian, it’s my job to kind of coach them along.”

“Honey, Have You Squeezed the Dachshund” was inspired by Christman’s concern that dog owners might not be able to learn enough about a serious condition through a half-hour long visit to the office. And he also wanted to find a way to reassure pet owners that, with effort, a disabled dog can still be happy. Though he’s paralyzed, Cosmo still goes for daily walks with Christman’s other dogs.

“I have a resistance band with a little bit of wrapping material around it and I put it under his belly,” Christman said. “He goes for his walk every day. I help hold him up, and he comes along with he whole crew. At home, he shimmies along the floor to walk around, but he would not know that he’s paralyzed. His spirit is fantastic.”

The book mixes fun stories from owners of disabled pets nationwide with technical knowledge from Christman’s veterinary training. It also include’s many techniques presented in laymen’s terms by Bryant.

“We looked around the country and got some nice little stories to show everyone just how great these guys are living their lives,” Christman said. “It puts a nice spin on something that can be so devastating or scary to hear. That’s what this book really does.”

Meet the Author: Christman will appear Sunday, Nov. 6 at the Brick Town Veterinary Hospital, 251 Chambers Bridge Road, for a meet-and-greet and book signing. The event will take place from 12 noon to 3 p.m. [/box]