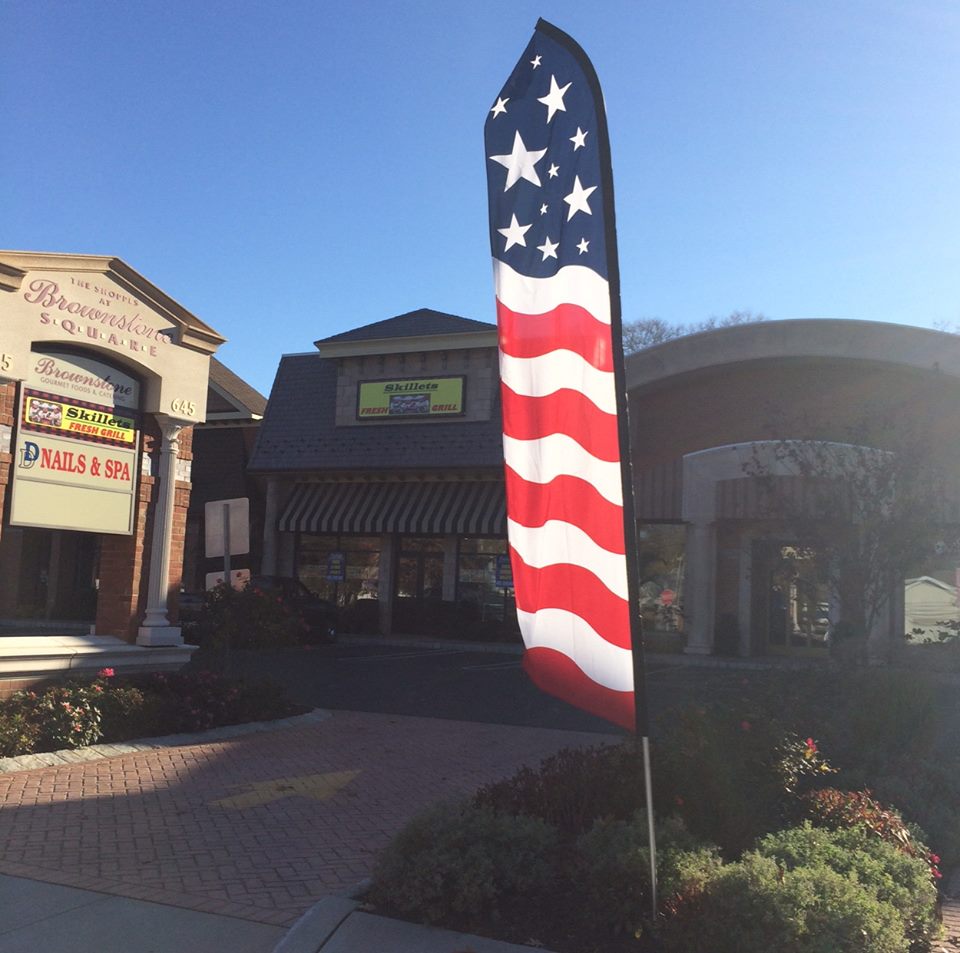 Scott James has spent the last year building his Mantoloking Road restaurant after investing in a state-of-the-art facility in the recently-completed Brownstone shopping plaza.

Being the only business in the plaza, traffic can sometimes be light, which prompted James to order flags that could be placed beside the road to let passersby know his restaurant, Skillets Fresh Grill, is open. Initially, over the summer, James put out flags advertising the fact that he was open, as well as menu items such as gyros and wings. Before long, two violation notices from the township appeared in his mailbox, ordering him to remove the flags and fining him up to $2,000. A judge ultimately fined him $400.

Last weekend, the dispute over the flags took on new life after the township filed another violation against the restaurant after a similar flag resembling the American flag was placed outside.


“Very disapointed in this local government,” James wrote on Facebook, attracting hundreds of shares on the social media site.

By Monday, the flag was down, and James and township officials were embroiled in a back-and-forth over the right to fly flags in front of businesses and what, exactly, constitutes a flag under the township’s zoning ordinances.

“He said it wasn’t a traditional American flag, it’s a feathered flag,” said James, referring to a code enforcement officer who issued the latest violation notice. “I’m not putting it back up, because I’m not taking a chance of getting fined $2,000.”

“Feathered” flags, which usually announce grand openings or specials at businesses, are generally banned in Brick Township, except when a temporary permit is issued by the township’s clerk’s office to allow a maximum of two to be displayed for a short period of time. There is an exception for American flags, which are specifically allowed to be displayed under the township code.

“This particular business was issued summonses and paid a fine back in July for not removing feather flags,” said township Business Administrator Joanne Bergin, who added the latest violation was issued for an “Open” flag rather than specifically for the American flag banner.

According to a copy of the violation notice obtained by Shorebeat, the officer who wrote the document did not delineate which flag prompted the letter. “No flags permitted any day,” was the only text written under the form-style notice. 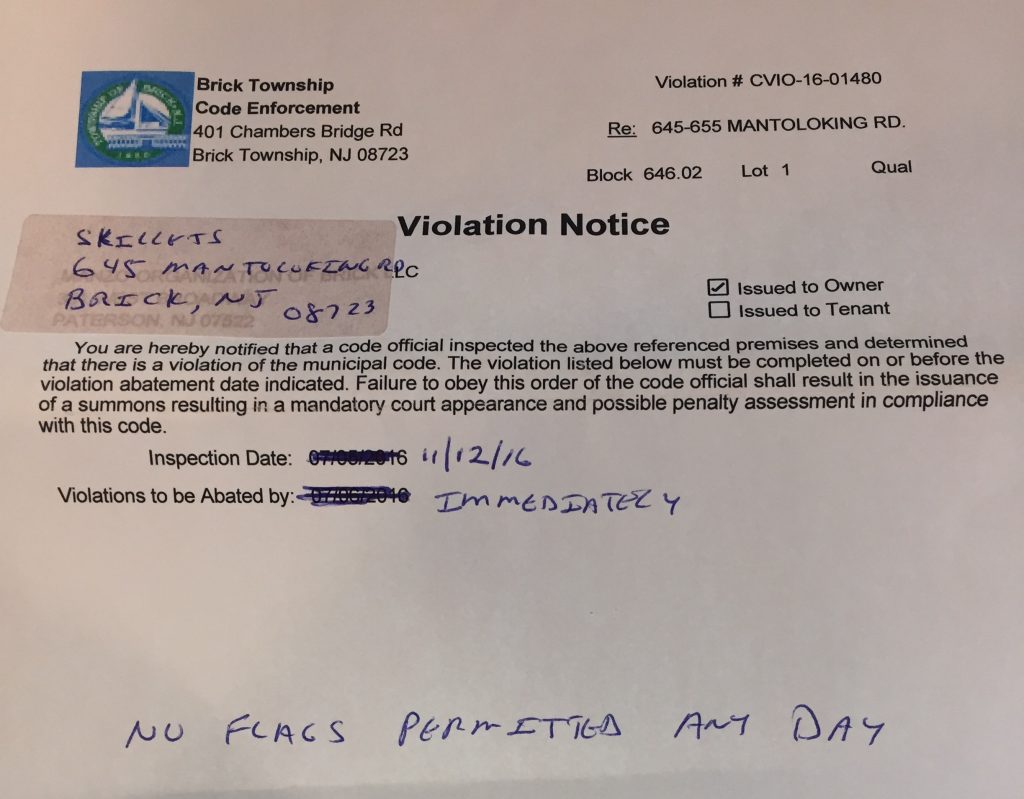 A code violation issues to Skillets Fresh Grill in Brick. N.J. over the displaying of flags. (Photo: Daniel Nee)

Bergin told Shorebeat on Monday that the township will allow James to display his feathered-style American flag.

“The code officer spoke with the business owner to ensure he understands that he didn’t receive the notice for the American flag and that he can keep it there,” Bergin said.

James said he is now nervous to put the flag back outside of his restaurant, which offers an array of hot, ready-to-eat dishes, including chicken ranch tacos, meatballs, pulled pork and signature chicken “spiedies.”

“I’m not putting anything back up until I can afford to go out and buy a traditional flag,” he said.

James said his dispute with the township has not affected his appreciation for those who serve the community. Police officers, firefighter and EMTs receive a 15 percent discount on all items.

“I’m not trying to cause any trouble, I’m just trying to let people know I’m open and show some patriotism,” he said.