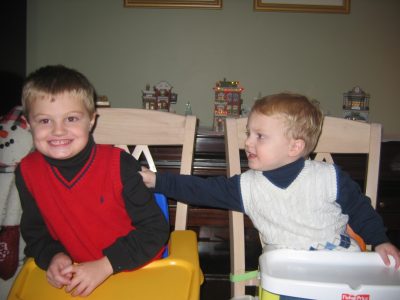 So, two nights ago the outside of our house caught on fire.

And I worried I wouldn’t have anything to write about this summer.

A little bit after nine o’clock on the fourth of July I had put the kids down, gotten into my pjs, and was preparing to watch the DC fireworks with my hubbie and honor our tradition of talking about our glory days when we used to actually go to the capitol to see them. As I was making my way to the kitchen to celebrate our nation’s birth with ice cream and wine (they go great together, try it!) I heard a loud explosion between my house and my neighbor’s. I had enough time to think what the hell that was as I ran to the door, which slammed open as my lovely neighbor screamed in my face that my house was on fire and to get out. I stepped outside to look and saw our huge spruce tree go up in smoke, and the side of our house, the outside wall to Justin’s room, ablaze.


And I swear to you, time stopped.

All I could think was a primal, “get Justin.”

I want you all to know that generally getting Justin out of bed when he’s asleep is a Herculean task that requires a great deal of chocolate prior to my getting him every morning. He only weighs fifteen pounds less than me now and is an inch taller, and our morning routine of excision from slumber is comical. I literally build in ten minutes just to get him out of bed, an act which requires me dragging his legs over the side, body rolling him, cajoling, begging, and occasionally cursing about the damn bus coming.

I never said I was a perfect mom.

I’m going to tell you moms that if you’re ever worried about getting your severely autistic child to do something they completely do not want to do in a life-threatening situation, let your worries go. Those stories about moms lifting cars off their babies are true. As I ran up the stairs I felt a huge adrenaline rush go through me, and I swear that from the time I got to his room and got him out of the house no more than thirty seconds passed.

Wonder Woman has nothing on any of us.

We were all alive. My house didn’t burn to the ground. Ironically, only Justin’s room sustained real damage (figures!) and all will be fixed inside of a month. A terrible accident ends up only inconveniencing us.

We are lucky as hell and we know it.

This post will be a bit rambling today as I swear my brain is still processing everything, but so many things came out of that night. Our neighbors are amazing. Our town’s police and fire workers are incredible, compassionate professionals. I learned that while waiting to see if my house would burn down that I have irreverent thoughts, like wondering if Justin thinks firetruck Santa is at our house and is pissed that we’re not hosting him.

Sarah Silverman’s “bygones” flitted through too.

I remembered that sometimes shit happens.

I remembered that when you can, it’s important to forgive.

But the most amazing thing that happened that night was my children.

Both of my boys are on the spectrum. One has OCD as well, the other ADHD. Both love their routines, although my high-functioning kid can go with the flow.

I will share with you that going with the flow is not my eldest son’s favorite thing.

When we got to my neighbor’s house, my youngest son asked for tv, plopped on the couch, and said he couldn’t wait to tell the kids at acting camp about this.

To Zach, life is always an adventure.

But the kid who stole the show was Justin. I will tell you as we made our way across the street to our neighbors’ house, after knowing we were all safe and out of the house, that the first thought I had was “how the hell am I going to keep him here.” And at first, I was right. Justin takes medication that makes him sleepy, and all that kid wanted to do was go back to sleep in his own bed. We had entered the house through the garage, and all he kept doing the first five minutes was lead me to that door, and put my hand on the knob.

After several minutes of this (and realizing this could last for several hours) I lead my kid to the front door . I shifted him to the side windows, pointed to the fire trucks, and said “Justin, our house is on fire, it’s not safe to go home now.”

He stood there for another minute, walked over to the couch, and laid down.

This may not sound momentous, but it is. Even a few years ago there would have been a meltdown of epic proportions, with me body blocking both exits until midnight or until he wore himself out. The thing is, it’s not that my boy doesn’t understand what we’re telling or asking him. It’s that Justin wants what he wants when he wants it, and until fairly recently trying to explain to him why he couldn’t have a sixth soft pretzel just didn’t work because he didn’t give a crap.

I secretly think he’s just an exaggerated version of me. That is just how much I love carbs.

But this time my boy simply stopped protesting, and the kid who barely sleeps anywhere other than his own bed conked out beautifully on the couch.

And later, just to be super amazing, when we got back in the house and he went to his room and we showed him the damage and told him he couldn’t sleep there, damned if that kid didn’t turn around and hightail it to our bedroom and throw himself under the covers.

We’ll just gloss over the fact that at 5:10 AM he decided it would be super fun to play on the computer.

So if you’re wondering what my point is (I warned you this was rambling, it’s your fault if you’re still reading), there are several.

My kids are awesome.

All the hours of Early Intervention, the amazing school practitioners, the outside therapists, our insisting that Justin try new things and learn to accept “no” paid off.

That despite this work we wouldn’t have had the same outcome even a few years ago- he was developmentally ready to accept his favorite pastime after eating was denied him, and he got over it.

I’ll say it one more time- my kids are awesome.

They surprise me, move me, and make me proud every day.

I couldn’t be more proud.

I love the hell out of them both.