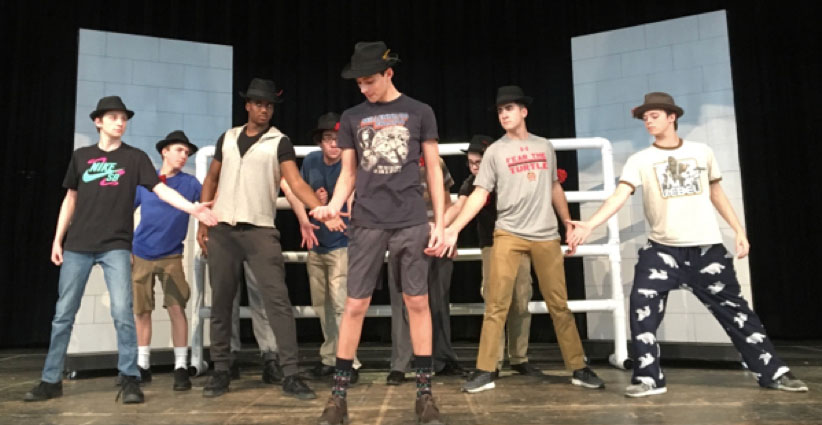 BTHS students prepare for “Guys and Dolls” for their spring 2018 musical. (Submitted Photo)

The Drama Club is an award-winning group, having previously won the “Ocean County Teen Arts Program”.


Set in Damon Runyon’s mythical New York City, “Guys and Dolls” is an oddball romantic comedy. Gambler Nathan Detroit (Christian Brando), tries to find the cash to set up the biggest craps game in town while the authorities, John MacIntosh (Lt. Brannigan) breathe down his neck; meanwhile, his girlfriend and nightclub performer, Adelaide (Alyssa Hajeski) laments that they’ve been engaged for fourteen years. Nathan turns to fellow gambler, Sky Masterson (Stephen Pasch), for the dough, and Sky ends up chasing the straight-laced missionary, Sarah Brown (Hailey Bennett), as a result.

Guys and Dolls takes us from the heart of Times Square to the cafes of Havana, Cuba, and even into the sewers of New York City, but eventually everyone ends up right where they belong.

The show includes such memorable musical numbers as Bushel and A Peck, Sit Down You’re Rocking the Boat, Luck Be A Lady along with the title number Guys and Dolls.  The Broadway production and movie has starred Marlon Brando, Frank Sinatra, Nathan Lane and Faith Prince among many famous entertainers.

The show is directed by Cheryl Best while the student Assistant Director is Erin O’Neill.