Dangerous Jellyfish Species Found in 17 Locations in Brick, Including Near F-Cove 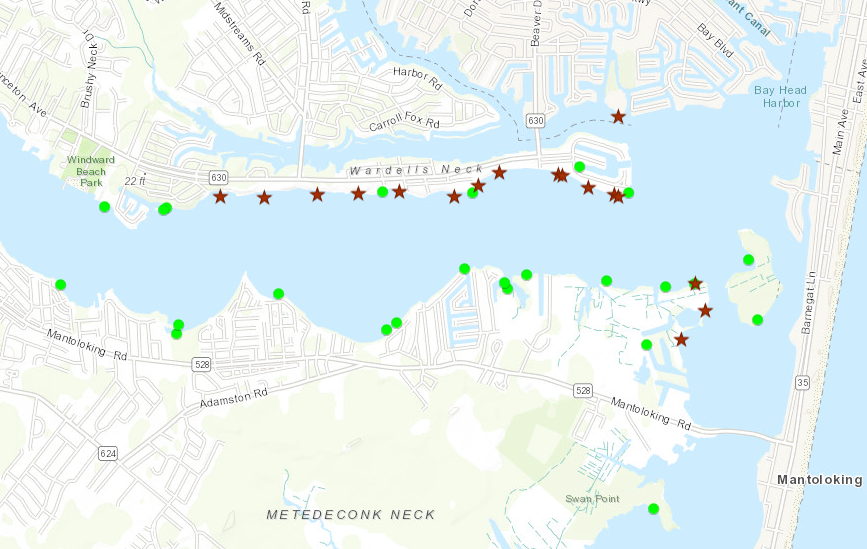 The state Department of Environmental Protection on Friday released data gathered over the last week that showed dangerous clinging jellyfish were found in 17 out of 40 locations surveyed by researchers.

The DEP has partnered with Montclair State University to track the jellyfish, which are about the size of a dime, after they were first discovered in New Jersey waters two years ago. Recent sightings led to a more intense investigation of the presence of the species in local waters, and a swim advisory for the Metedeconk River and Barnegat Bay was issued by the state. That advisory was reiterated and extended on Friday.

The clinging jellyfish, a native to the Pacific Ocean, is small and very difficult to spot in the water. A sting can produce severe pain and other localized symptoms and can result in hospitalization in some individuals. It is called a “clinging” jellyfish because it survives by clinging to the edges of plants and aquatic vegetation. The species is only found in rivers and bays; the advisory does not extend to ocean beaches.

The state published a map on Friday showing where the species had been found over the last week. The vast majority were found along the northern bank of the Metedeconk River, but a few were found in northern Barnegat Bay in an area known as “Gunner’s Ditch,” which is a small channel between sedge islands and the Brick mainland. No jellyfish were found in F-Cove or Traders Cove Marina, the data showed, both popular spots for boaters. One jellyfish was found outside of F-Cove, but another search inside in the cove had negative results.

The DEP and Montclair researchers will continue monitoring the population but “there is no method to effectively control clinging jellyfish populations in the aquatic environment,” the DEP said in a statement on Friday.

Environmental officials are seeking the public’s help in tracking clinging jellyfish, but caution is required, they said. If you see a clinging jellyfish, do not try to capture it. Take a photograph if possible and send it to Dr. Paul Bologna at bolognap@mail.montclair.edu or Joseph Bilinski at joseph.bilinski@dep.nj.gov along with location information.