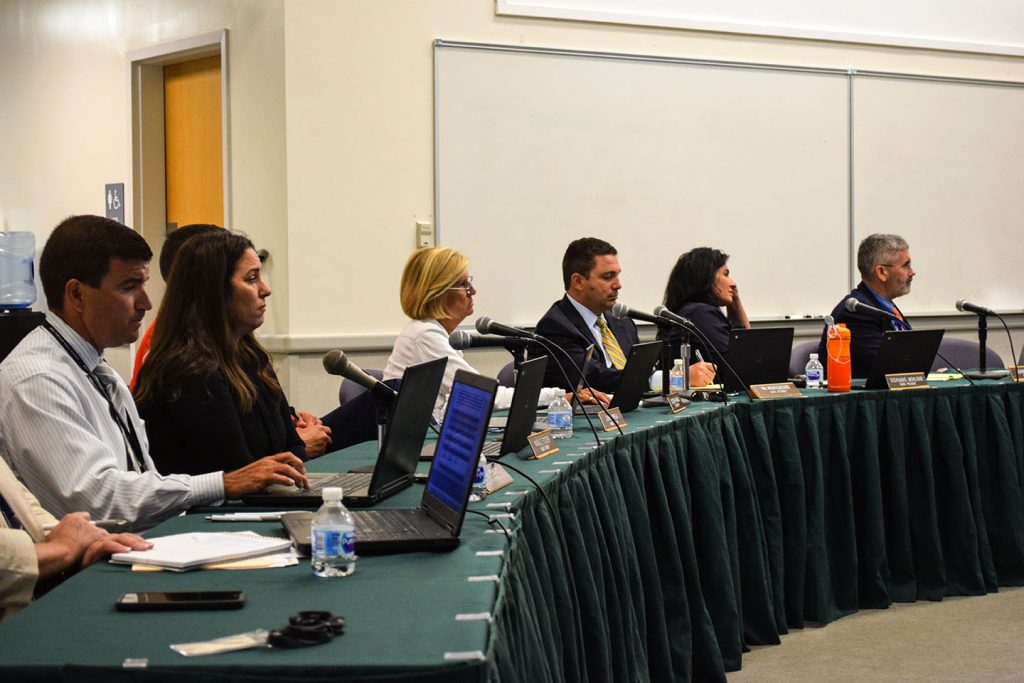 The Brick school district was able to stave off potential layoffs in the wake of a $1.9 million state funding cut, but officials warned the state will require Brick to raise school taxes to the maximum amount allowed by law each year for the next seven – and that “draconian” cuts to services are on the way.

The Board of Education on Tuesday night eliminated several supervisory and teaching positions, but Board President Stephanie Wohlrab said the positions were open and not yet filled. Another 44 positions had already been eliminated this year prior to the funding cut, primarily by attrition.

The future, frankly stated by district officials, appears bleak. Business Administrator James Edwards told a room filled with concerned taxpayers and parents that the district will be required by the state to raise taxes to the maximum 2 percent cap limit every year for the next seven. The cap limit is above and beyond increases to health and pension benefit payments and other exceptions under the law. The district will also have to look at “draconian” cuts to services, Edwards said, since even at the maximum rate of annual tax increases, the Brick district will not be paying enough local tax dollars into its school system under the state’s formula.


“I think what we’re going to be looking at a lot of different things we need to consider, and the most important thing is that the administration … and everyone who is a part of this process is doing what is in the best interests of the children,” said Wohlrab.

The district will shed several teachers and supervisors plus remove $1,348,276 from the school system’s surplus account to balance the budget. The positions being eliminated include a humanities and science supervisor, one high school teacher, two resource room teachers, one bilingual education teacher and two elementary school teachers.

Edwards said the district will make a special request to the state education commissioner, much like it did last year when cuts were proposed, for emergency funding in order to meet the constitutional requirement of a “thorough and efficient” education for the township’s children. Last year, the district convinced the state that Brick’s tax ratable base was still reduced by more than $300 million due to Superstorm Sandy, leading the state to restore some funding.

“If you think you’re going to get more money from Sandy relief, you have a problem,” said resident Vic Fanelli.

“Everything the district did last year for that final appeal would be done again this year,” said Superintendent Gerard Dalton, who added he has been in contact with colleagues in Toms River, which is suffering a similar funding cut.

The state, Edwards said, continues to insist that Brick is among the wealthier towns in the state, using a formula that is based half on the income of residents and half on the value of property. As the municipality with the most waterfront property in New Jersey as well as acres upon acres of highway commercial frontage, Brick is considered by the state to be a valuable community that can afford a $22 million tax hike, Edwards said, adding that he disagrees with Trenton’s assessment.

“We have to get to the state level and find out how this is fair to Brick taxpayers to say that this is a wealthy district,” said Edwards. “How is it that Princeton, under this formula, is getting $4 million more in state aid?”

Edwards said that this year will likely be the easiest for which to budget. The progressively-higher loss of state aid over the next seven years will not be enough to cover the district’s expenses even with the required tax increases.

“We are going to have expenditure cuts,” Edwards confidently stated. “And in my opinion they are going to be draconian cuts.”

The district will have to look at “big ticket items,” he said, in response to a question by former board member Larry Reid as to whether so-called “courtesy busing” could be curtailed. Such busing is provided to children who live outside the mileage limit from their school where transportation is required by law.

Jerry DiCicco, a Herbertsville resident, opined that the cuts may be politically motivated.

“This is classic payback,” he said. “Murphy knows he got his clock cleaned here.”

Murphy signed the funding realignment bill, pushed by Senate President Steve Sweeney, into law after initially not including it in his annual budget proposal. Murphy jokingly acknowledged his loss in Brick when swearing in Mayor John Ducey, a fellow Democrat, to his second term Jan. 1.

There are no solid plans as to how the district will plan for the long-term cuts, which will culminate in a $22 million reduction in funding every school year after the gradual decreases. Some residents had suggestions, however.

Former board member Karyn Cusanelli said if there are future staffing cuts, a reduction in administrators should be considered before teaching staff.

“Six teaching positions really equate to two administrative positions,” said Cusanelli. “I’m concerned about the impact on the students. It’s disappointing to me, as someone who’s pro-teacher, that twice now teachers and [paraprofessionals] have been cut.”

Reid, who chaired the board’s finance committee during his term, called for a detailed audit of all the district’s nearly 800 line item accounts in its budget.

“Somebody has to scrutinize those 800 accounts, because there are a lot of wild numbers in those accounts,” he said.

Wohlrab said she plans on working with state officials and other districts to try to reverse course on the de-funding measure.

“I know that it’s dangerous to come after people’s kids,” she said. “And Brick is a strong community of a lot of people who have been here a long time. We’re going to do the best we can to turn this around to the best of our abilities.”