Brick Township’s planning board unanimously voted to give conditional approval to the developer of a proposed 75,000 square foot medical building.

The facility is planned for the “triangle lot,” which borders Route 88, Jack Martin Boulevard and Burrsville Road, located just yards away from Ocean Medical Center. Representatives from Kamson Corporation, the owner of the property, said at the meeting Wednesday night that they have not determined the “end user” of the building, though the site has been submitted for consideration to become a new Veterans Administration outpatient clinic, replacing the overcrowded facility on Route 70. That decision is expected to be announced on Monday.

The hearing drew a few residents of neighboring communities, but did not face nearly the opposition that previous proposals for the site – a hotel, condominiums and retail development – did. A neighboring property owner voiced concerns but ultimately endorsed the application.


No matter who fills the building, the most visible changes will be the clearing of the large plot of land on which it will be built as well as a new traffic light at a notoriously tricky intersection in town. John Rea, a traffic engineer hired by Kamson, said the developer would fund the installation of a new traffic light at the angled corner of Route 88 and Burrsville Road, where drivers currently have to inch out and wait to turn as cars come around the bend.

“We have enough traffic there to warrant the installation of a traffic signal already,” said Rea, adding that the company will work with the state Department of Transportation and Ocean County on setting up the new signal.

As for the medical building, it is planned to be a sprawling, two-story facility that measures 74,999 square feet, said Andrew French, Kamson’s engineer on the project. It will include entrances and exits on each road on which the site borders, though some will be “right turn only” exits, said Rea. The project will also include the replanting of trees, 600 shrubs and 1,000 perennial plants and grasses. Most significantly, the site will include sidewalks along all three roadways, as well as a path that will connect all three to each other. A “pocket park” will also be included at the site.

The project’s site plan leaves room for an MRI facility as well as emergency generators, if it is determined they are required. 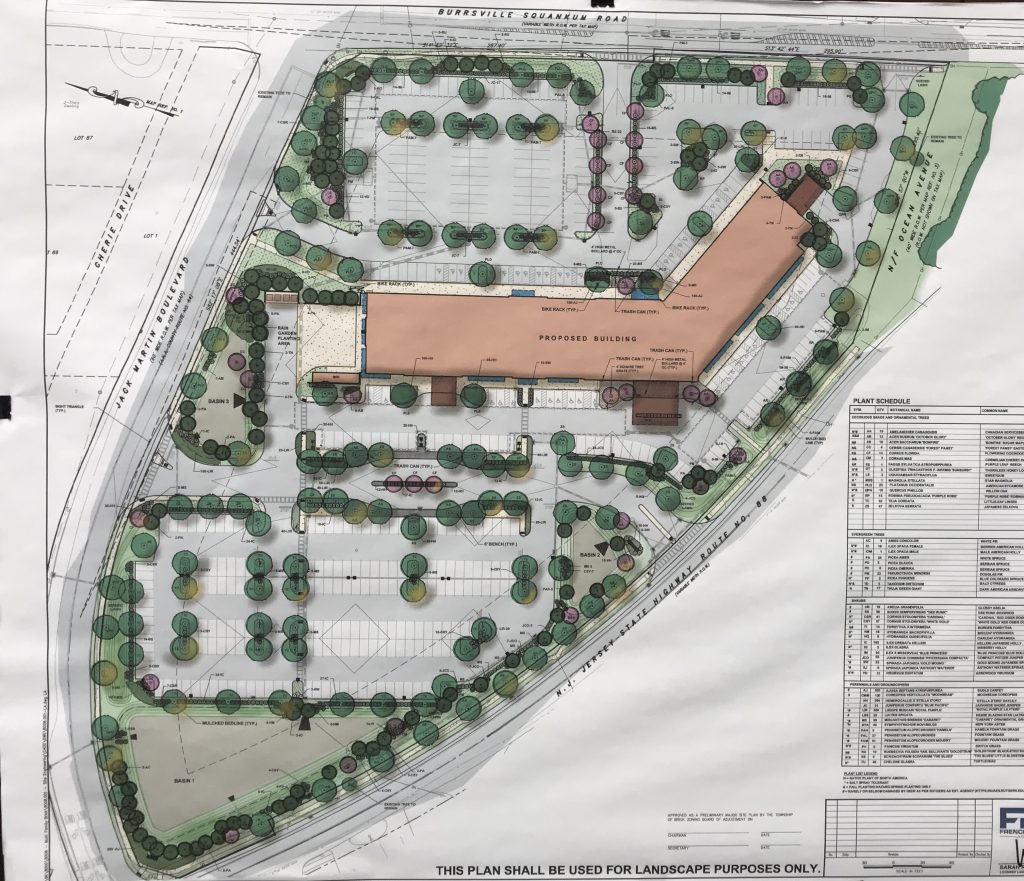 French said the 476 parking spaces was meant to improve access to the building, since only 375 are required. There will also be 45 handicap spaces that will be located against the building, plus spaces for bicycles and motorcycles to be stored, plus an ambulance parking area. Plans additionally call for a cut-out near the Route 88 entrance for buses.

“We’re certainly aware of mass transit and would love more of it to come to Brick Township,” said French. “We’d love to have a formal stop there which could, maybe, link to the hospital down the street.”

There would be room for public NJ Transit buses as well as smaller buses, like Brick’s senior citizen bus and the county’s OceanRide buses.

“It will not be a park-and-ride,” French assured. “It will be for people who are coming to our facility, mainly seniors who need a bus to get around.”

The site plan also includes two retention basins, new drains along the roadways – the area is prone to flooding during heavy rain events – and a privacy berm in some areas.

“It’s a less intensive use” compared to the hotel or mixed use condominium-retail plans that had been proposed before, said Township Planner Tara Paxton.

Wednesday night’s vote in favor of the project was a preliminary approval of the site plan. Kamson must return to the board for final approval, which will include more detailed plans and a checklist of items that need to be completed, including the granting of state permits.