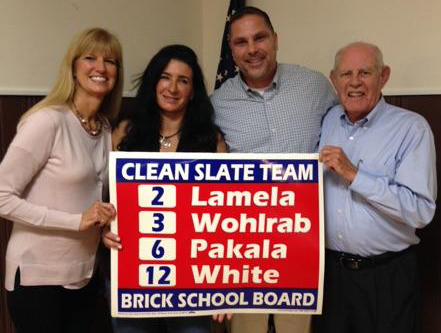 A group of current and former members of the Brick Township Board of Education have been reprimanded and fined by the New Jersey Election Law Enforcement Commission after they mishandled campaign finance reporting.

The board, commonly referred to by its acronym ELEC, decided the case against the former “Clean Slate Team” ticket of school board members last month and published it recently.

The charges – which are administrative, not criminal – were levied against the board members, supported by the Democratic party in the technically non-partisan election, in 2015. Stephanie Wohlrab, the current board president, current board member Victoria Pakala, and former members John Lamela and George White were the subject of the complaint. Joseph Nezgoda, Pakala’s husband who served the ticket’s treasurer, was also charged.


The commission upheld charges that the group filed fundraising statements late and that multiple small contributions to their campaign were mislabeled as single, larger contributions that appeared as if they were transferred from one campaign account to another. The commission dismissed three accounts that alleged the group failed to provide detailed reports of donations above $300, as required by state law. Allegations of improprieties following the team’s election in 2015, which resulted in a new board majority that immediately canceled contracts and terminated numerous district officials, were submitted to numerous state agencies and ultimately investigated by ELEC.

The commission imposed a joint fine of $1,055.78, plus a $300 individual fine against each member of the group. But citing the fact that the campaign did not receive a reminder notice in the mail about filing obligations as a mitigating factor, the commissioners ultimately reduced the joint penalty to $633.47 and the individual fines to $180 each. The decision went on to state that because the group paid fines before ELEC rendered its final decision on the matter, the penalty was reduced to a joint total of $506.78 and individual penalties of $144.

The commission also issued a formal reprimand against each of the respondents. The final decision document confirms all members of the group paid their fines in full.

Wohlrab, a professional campaign fundraiser for Democratic candidates statewide, said “we cannot turn back the clock” on matter, taking responsibility for the incident.

“Our treasurer was inexperienced and made a mistake,” she said. “As candidates, we take responsibility.  We cannot turn back the clock.  We reviewed and provided all required filings/documents to ELEC to resolve the late filing issue.”

Two seats, occupied by board members Maria Foster and Jessica Clayton – neither of whom were involved in the 2015 election – are up for grabs this November. Candidates, including incumbents, have until July 27 to register to run for the Board of Education in the general election.