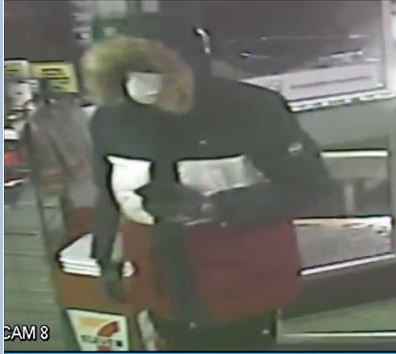 Police were looking for a man they say assaulted a clerk at a Brick Township 7-Eleven convenience store during a robbery early Wednesday morning.

According to Sgt. Jim Kelly, officers were called to the 7-Eleven store at 101 Chambers Bridge Road at about 1:30 a.m. Wednesday morning. The responding officers were told that the suspect struck the victim on the head with a solid object and “removed a quantity of cash from the cash register along with a box of cigarettes.”

The victim suffered an abrasion on his head. The suspect then fled the store north on Chambers Bridge Road, Kelly said.

The suspect is described as a black male, approximately 6 feet tall, with a thin build. At the time of the robbery he was wearing a red, white and blue jacket, black track pants with white stripes running down the outer seams, and red, white and blue sneakers. The hood of the jacket had fur around the edge.

The suspect is still at large, police said. Anyone with information is asked to call Brick Police Detective Tara Schinder at 732-262-1115.