Brick police are continuing their crackdown on suspected hand-to-hand drug deals occuring in parking lots and some residential areas of the township, arresting five individuals for varying levels of offenses over the course of a four-day period last week.

The incidents were distributed across the township, as described by Sgt. Jim Kelly:

On Monday night, Feb. 14, at approximately 10 p.m., detectives observed a suspicious male identified as Nisar Ahmad, 64, of Cliffside Park in the area of the Sweet Green Food Market and the Wine Shoppe on Hooper Avenue. An investigation resulted in Ahmad’s arrest for loitering to obtain a controlled dangerous substance. He was released on a summons.

On Tuesday, Feb. 15, at approximately 6 p.m., detectives observed a hand-to-hand transaction in the Maple Leaf Park condominium complex. A subsequent vehicle stop and investigation led to the arrest of Zachariah McInturf, 31, of Brick, on charges of loitering to obtain a controlled dangerous substance, and Anthony Connors, 36, of Brick, on charges of possession of drug paraphernalia. Both subjects were released on summonses. 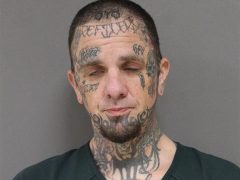 On Thursday, Feb. 17, at approximately 1:30 p.m., detectives observed suspicious activity in the parking lot of the Santander Bank on Beaverson Boulevard. The vehicle they were observing had “several equipment violations and the passenger was littering out the window,” the report said. The vehicle pulled out of the parking lot and Sgt. John Gordon initiated a traffic stop.

Detectives called Ocean County Sheriff’s K9 Officer Vosseller and his partner Duke respond to assist with the investigation, which police say resulted in the discovery and seizure of heroin, Suboxone, crack, methamphetamines, black tar heroin, and drug paraphernalia. Some of the substances were packaged for resale.

The driver, Daniel Anderson, 32, of Point Pleasant Borough, was charged with possession of heroin, Suboxone, crack, methamphetamine, possession with intent to distribute heroin and methamphetamine, drug paraphernalia, and motor vehicle summonses. Anderson was issued a warrant and lodged in Ocean County Jail.

Only Bell was still listed as an inmate in the jail; his photograph was the only one available.