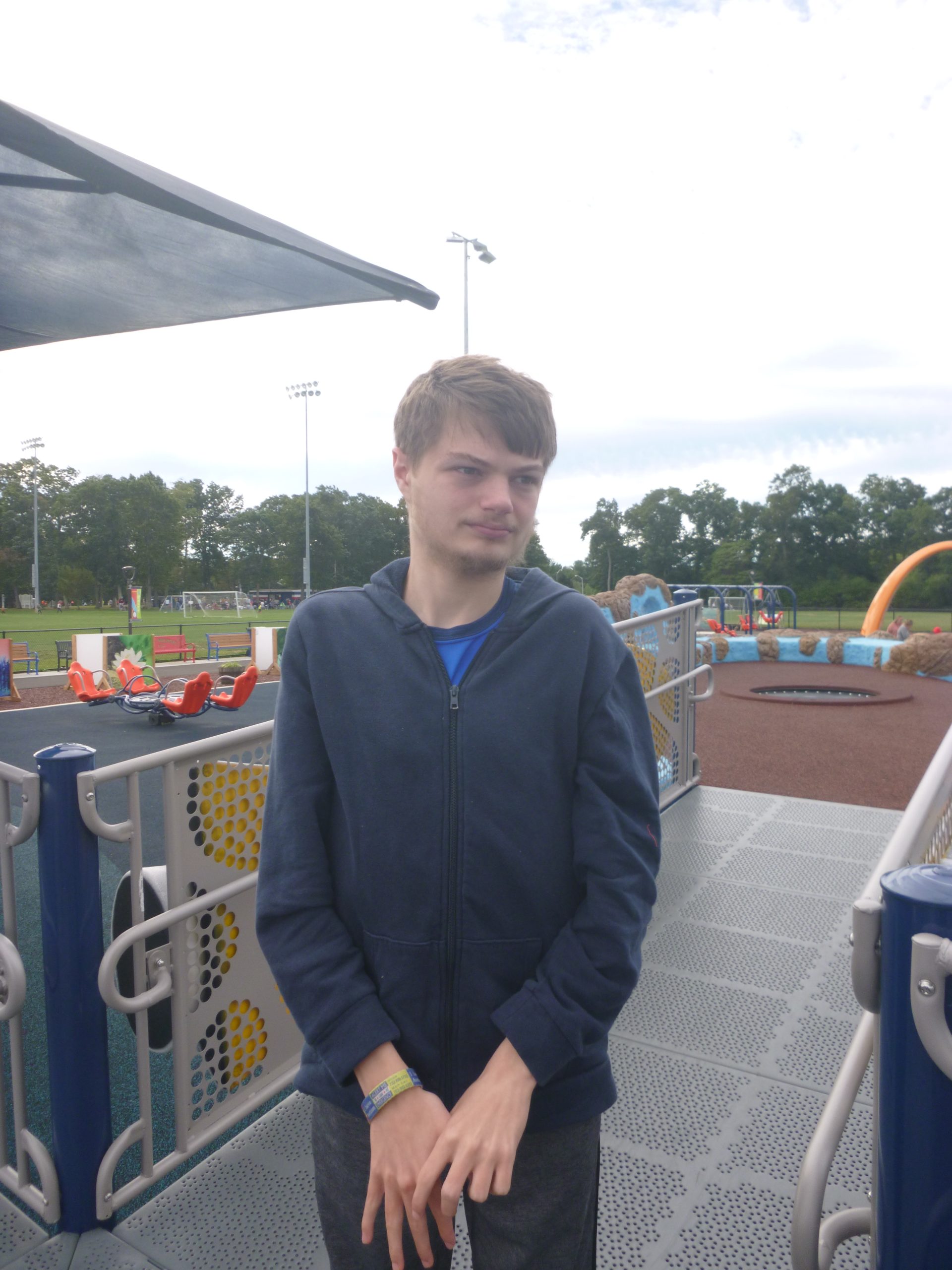 I pull up to a mostly empty parking lot, my nineteen-year-old severely autistic son rocking out in the backseat with anticipation. We have been to this location once before but I had yet to register for access to the Toms River RWJ Barnabas Field of Dreams, and I had wanted to take a look at it first before I went to the trouble. Justin had sat patiently in my car that day as the volunteers actually let me register in person and quickly look around so I could make my decision.

It was awesome. I found myself wishing it had been around years ago.

Even though Justin is nineteen he is developmentally around six years of age, and the time when he “should” have outgrown playground had been extended for many years due to his developmental disabilities. His desire for playgrounds had waned, however, about five years ago, and we stopped going as he only wanted to be there for a few minutes and it wasn’t worth the effort.

As I quickly looked around at the space I was really impressed how they had designed it with special needs kids in mind. There were a variety of different kinds of swings throughout the park. A huge climbing apparatus with slides and a rock wall offered other opportunities for gross motor activity. There was a large enclosed seat that acted as a zip line, and a cool musical arch that when a button was pushed gave directions to dance on a variety of painted numbers. There were bathrooms and a basketball court, special see-saws, and it was all completely enclosed.

I remember at the time thinking Justin would have loved it ten years ago. I was interested to see if he’d love it now.

We got to the locked gate, and sure enough the app that I downloaded worked, and we were admitted. Justin hesitated a moment then ran directly to the apparatus with the slides, and gave them a whirl. I was able to convince him to go on the zipline a few times, which he seemed to like. Swings were out. Then he discovered the arch and the one thing it’s possible to perseverate on in the entire playground- the button.

He went to town on that, but eventually I was able to redirect him to check out the bathrooms. Again the app worked to unlock the door, and afterwards we worked our way back to the arch again and back to our car.

I will definitely bring Justin back again, but I would do what I did this Saturday, which was go about when it opened so it wouldn’t be that crowded. Although he is skinny he is still an adult, and I’d rather not have him around a ton of little kids, plus if he pushed that arch button when someone was trying to follow the directions they could get upset.

I checked out the website: https://rwjbhfieldofdreams.com/ that morning before I went and found out this year it was only open from 6/27-12/4, and closed on Sundays. The hours are listed there as well. It also seems that events are held there that all members can attend but that might draw large crowds, so it’s a good idea to check the website before you go. There are volunteers there at certain hours each day. If you’re interested in joining, go to the “become a member” tab on the website.

All in all it was an awesome venue, one which I will try again with Justin in the future. I saw some very happy little kids there, and I’m certain many families will take advantage of this playground again and again. One of the volunteers said it does get very crowded on nice days especially later in the day, so keep that in mind.

As an autism mom, I’m always looking for things to do with Justin, and it’s gotten more and more difficult as he’s grown older and his interest in things has waned. I think this may be something he will enjoy on occasion, even if it’s not for an extended period of time.

A lovely idea that will bring joy to many. Hope it works out for all of you.