About 100 Abandoned Homes May Be Demolished in Brick 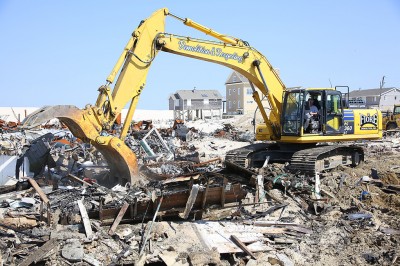 State officials have reduced a list of about 200 homes the township submitted to the state Department of Community Affairs to approximately 100 homes that will be slated for demolition under a federally funded program that is being administered by the state agency.

The program – initially conceived by the federal Department of Housing and Urban Development in the wake of the real estate crisis of 2008 – may prove extra useful in Brick since homes remain abandoned since Superstorm Sandy to the detriment of the neighborhoods around them, officials have said.

Under the program, the township develops a list of abandoned properties and submits it to the state, which then deploys inspectors to identify whether or not a property in question adheres to the program’s requirements. Township officials have said homes included on the list must be “truly abandoned” and in a dangerously poor condition for over six months with no construction work planned. It also must be uninhabitable and beyond repair.


The list of about 200 homes “was generated, generally, through our code department,” Business Administrator Joanne Bergin said, with input from both elected officials and residents who called the township with complaints of abandoned properties.

“To this day, my office gets three or four [calls] a week saying, ‘Hey, this house has been empty since Sandy,’” said Mayor John Ducey. “It’s based on this process of the whole town telling us where these houses are that the list was developed.”

But the program isn’t limited to Sandy-affected homes; any abandoned property in Brick could have been added to the list.

Under the program, Bergin said, the township would not take ownership of the property in question. Rather, the state would include it on a demolition list and would simply remove the building in question. The program comes at no cost to the township, Bergin added.

Ducey said the number of houses included in the program could eventually be whittled down even further as the state continues to send inspectors to each property. Also, he said, the state is looking to competitively bid the demolitions by advertising several properties at a time.

Bergin said there was no final timeline set as to when the demolitions would begin.

“We are waiting for word back from them on the properties in Brick that they will be demolishing,” she said.