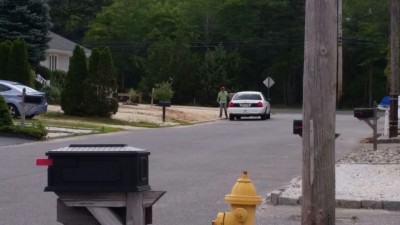 An inspector with Brick Township walks along a street in a local neighborhood. (Photo provided by Domenick Brando.)

The township has sent at least two inspectors to a number of neighborhoods across Brick, mainly those impacted by Superstorm Sandy, to take photographs and inspect properties whose owners were ultimately sent notices that they were out of compliance with federal flood codes.

The inspection team has consisted of two interns and, initially, a senior employee who was training them, said Business Administrator Joanne Bergin. The reason for the inspections, which in some cases involves the inspectors going onto private property, is the township’s desire to enter the Federal Emergency Management Agency’s Community Rating System, or CRS, program. Once a town is certified in the program, its residents receive discounts on their flood insurance policies, but FEMA notified the township of 655 properties that may be out of compliance and could prevent Brick from participating.

“Essentially, he checks to make sure the house is a visibly compliant structure,” Township Engineer Elissa Commins said of an inspector’s role. Commins said an inspector does, in some cases, go on private property and take photographs of homes, but does not exceed a resident’s “reasonable expectation of privacy.”

Brando raised a question as to whether the motives of the inspectors are purely to look into the flood compliance issues or if they are on the hunt for other code violations or work being done without permits in the wake of the storm.

“They did every house on my block, and I know they’re not on the list, because I have the list,” said Brando, who provided Brick Shorebeat with a photograph of an inspector dressed in a green T-shirt walking along a township street, next to what appears to be a white township vehicle. The person in the photograph is dressed in personal clothing, though Bergin said the inspectors have now been issued township shirts and carry identification.

“If we’re photographing a house, it’s from the list of the 655 structures,” replied Commins.

Mayor John Ducey implemented an amnesty program in June for those who completed work on their homes without applying for the proper permits, and Bergin said the administration has continued to work with people even after the program ended to get their permits in order.

“Obviously, we’re all on the same page with wanting people to get back in their homes, but we want to make sure all the inspections were done,” Bergin said. “It is not the overall intention to penalize people who did not get their permits. Our number one goal is to get folks in and get those inspections done.”

“We’ve been working diligently,” said Ducey. ” If we get all the structures to be compliant in town, everybody in the whole program gets a reduction on their flood insurance.”