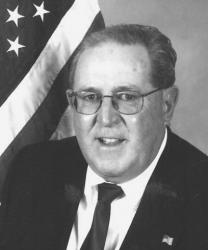 Former Brick Mayor Daniel J. Kelly died Monday night, Brick officials said, prompting many to remember the former township leader as a man with a big heart who helped shape the lives of many young people as a coach.

“Dan Kelly was an all-around great guy, a true Brick guy,” said John Ducey, the current mayor. “He not only was on the planning board for many years, he was mayor and got to lead our great town, but more importantly he’s known around the community as being very involved with St. Dominic’s and all the sports organizations.”

“He was a very kind and caring man, a good man, and he will be missed,” said Councilwoman Andrea Zapcic, tearing up at the township council meeting Tuesday night. Zapcic said she worked under Kelly when he served as mayor and remembers him fondly.


Kelly, a Democrat, led the township during a tumultuous period, after Joseph C. Scarpelli resigned the mayor’s office amid scandals that would eventually lead to his incarceration on bribery charges. Kelly was appointed to the mayor’s office in Jan. 2007 and ultimately made a run to complete Scarpelli’s term, but lost the election to former mayor Stephen C. Acropolis.

Kelly told the Brick Bulletin in a 2007 article as he was departing the mayor’s office, that he saw his role as mayor as a “caretaker” of the township, saying he loved his fellow residents but disliked contentious council meetings and battling with township Republicans.

He leaves behind his wife, Gerri, three sons and several grandchildren, plus countless township residents he coached as youngsters.

“A number of kids who are now in their 30s and 40s were coached by Dan Kelly, and they’re all sad to see him go,” Ducey said. “He was a family man, a good husband to his wife and a wonderful father to his children, who all grew up to be wonderful individuals themselves.”

Brick Shorebeat will announce funeral and memorial arrangements for Kelly when they are released.