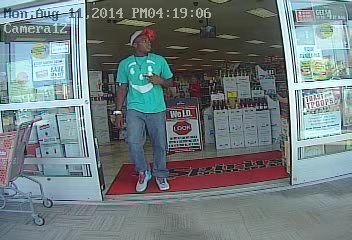 A suspect in the theft of a credit card in Toms River. (Photo: Toms River Police)

Toms River police are asking for the public’s helping in identifying a person who used a stolen credit card to make fraudulent purchases.

According to police spokesman Ralph Stocco, the investigation began Aug. 11 when Officer Joshua Kuhlwein met with an employee of Community Medical Center who realized that her wallet was stolen from her work area.  She contacted her credit card companies and it was determined that the card had been used already at the shopping plaza located at the corner of Route 37 and Route 166.  Further charges were denied from other local businesses, Stocco said.

A suspect in the theft of a credit card in Toms River. (Photo: Toms River Police)

Charges were made at the Staples, Spirits Unlimited, and Rite Aid, and police were able to narrow down surveillance footage from the retail locations to get a photo of their suspect, who is described as a black male with a medium build, in his twenties.  His hair is cut very short and he may have an earring in his left ear and wears a large white watch or bracelet on his right wrist.

On the date of the crime he was wearing a green tee shirt with a smiley face on the front, Stocco said.

The man’s photo is attached to this story. Police are asking that anyone with information or can identify the suspect contact Detective Robert Oneill at 732-349-0150, ext. 1255 or private message the department at https://www.facebook.com/tomsriverpolice.