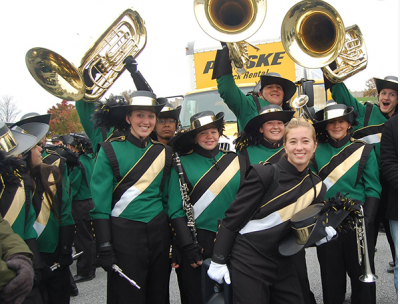 An agreement between the Brick Township school district and neighbors of Brick Memorial High School over a noise complaint against the high school’s marching band has ruffled feathers with a number of band parents, but district officials say they are planning a parent meeting to address issues of miscommunication.

After the agreement between the district and neighbors was announced yesterday, band parents criticized officials for what they thought was a plan to have the band practice on the high school’s baseball field. But Superintendent Dr. Walter Uszenski said the band will never have to practice on the baseball field at all.


Parents who spoke with Shorebeat on Thursday said practicing on the baseball field could be dangerous because of a lack of lights and the fact that the pitcher’s mound and other surfaces are uneven. On Wednesday, Mayor John Ducey told Shorebeat the baseball field was one of the places the band would practice.

Uszenski said, however, that the agreement forged with “one or two” neighbors who have complained for many years about the sound of the band, does not require students to march on the baseball field. Instead, he said, the band can use two parking lots at Brick Memorial as well as the football field when it is available.

“We never, ever said they had to go to the baseball field,” said Uszenski. “It was an option that was thrown out there last year, but the band director told us that it wouldn’t work.”

Uszenski said he and other district officials will call a meeting with band parents to explain the situation in depth.

“We’re going to ask for a parent meeting so the administration can speak directly with the parents,” he said. “The agreement [with neighbors] worked last year, and I don’t know why it can’t work this year.”

Last year, Uszenski said, the agreement held that the band could use the football field or either parking lot for practice. The biggest complaint from neighbors were the snare drums, which then-principal Dr. Richard Caldes said could sometimes reverberate off the walls of the school and become amplified. The drummers then began practicing toward the front of the school, Uszenski explained, and “I never got any more complaints.”

The story of the complaining neighbors was met with widespread regional media coverage Thursday, including an incident on New Jersey 101.5 radio Thursday morning where a host gave out Ducey’s phone number, prompting the mayor to call in. On the show, Ducey said the school district could come to the township council to request the governing body exempt the band from the township’s noise ordinance, effectively nullifying any complaints.

“I have a call into the mayor on the noise ordinance,” said Uszenski. “He hasn’t gotten back to me yet, but I absolutely want to discuss that.”

Parents of band members say their top priority is preserving the stellar reputation of the Marching Mustangs band, which includes about 90 young musicians and is considered one of the elite high school bands in the state.

“What we’re looking for is to protect the band program, which has been in existence for 30 years,” said Zurlo. “It’s a family, and they all look after one another. When I hear one or two complaining about something, it makes no sense. It’s not noise, it’s music. Get your priorities in order.”