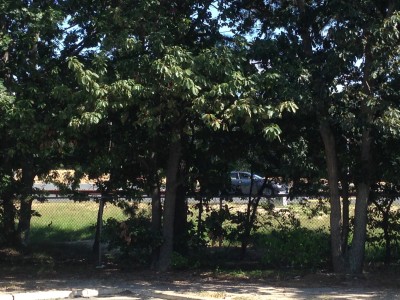 As residents of the Evergreens Woods development in Brick continue to deal with more noise than ever emanating from Garden State Parkway traffic, not only have state officials declared that they will not build a sound wall to contain the noise, a new decision states the trees cleared for the highway’s expansion can’t be replaced.

A state grant awarded to Brick Township known as the No Net Loss grant allocates money to municipalities to replace trees that were removed in infrastructure projects. In February, the township accepted a $511,020 grant to replace trees that were cut down in the ongoing Garden State Parkway expansion project and received a waiver from the state to plant the trees near Evergreen Woods even though some of them would be on private property.

Recently, Mayor John Ducey said, the township received a determination letter from the state attorney general’s office that prohibits the township from using the money to plant trees on private property.


“The grant is very specific with what it will fund,” said Joanne Bergin, township administrator.

Residents of Evergreen Woods say the noise from the highway since trees were removed to expand its shoulders has been unbearable, keeping them up at night and waking them up early in the morning. There is also a safety factor, some say, because a tree could stop a a driver who loses control of a vehicle from plowing into a home.

The lack of trees is the latest in a series of battles that Evergreen Woods residents have fought with the New Jersey Turnpike Authority, which runs the Parkway, over quality-of-life issues related to the construction project and its aftermath.

Michelle Spector, an Evergreen Woods resident, said she has been told by officials that they do not want to place a sound barrier in Brick because it will set a precedent that could lead to the agency having to build sound walls elsewhere. As for the trees, Spector told members of the Turnpike Authority board last month that residents’ homes are now visible from the highway which has decreased their value.

“All they do is keep talking about the berm they built,” said Spector, who then showed a reporter pictures of weeds on the side of the road that were taller than the berm. ”

In a YouTube video the residents made earlier this summer, decibel levels outside their homes, driven by constant highway noise, reached in the high 80s. According to Dangerous Decibels, a hearing loss prevention group, that is about the same volume level as a bulldozer at idle, which can cause hearing loss after just one work day without protection.

For now, Spector and John Sluka, another resident who frequently attends meetings of the township council and Turnpike Authority, will keep attending meetings and consulting with attorneys, but the the loss of the trees is just another setback on a long line of losses fighting a state agency.

“We get the ‘promise of a possible maybe,’ that’s what I always say,” said Spector.