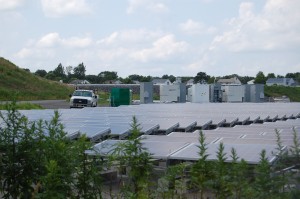 The Brick Township council is set this week to vote on a revision to the redevelopment agreement which will govern the relationship between the township and Brick Standard, LLC, the new name of the owner of the solar array at the former French’s Landfill site.

The redeveloper’s agreement has been revised before as the deal with the developer, formerly known as Standard Alternative, evolved from primarily a land lease agreement to a partnership. The details of the revised deal, which appears on an agenda for the Sept. 9 council meeting, are not disclosed in agenda documents, but it is expected they will be announced at the meeting itself.


The revisions that will be voted on include a reduction in the price for energy to be paid by the municipal government and the MUA and the modification of the terms of the financing agreement. The specific terms of the revisions do not appear in the agenda documentation.

The solar farm has been constructed at the former French’s Landfill off Sally Ike Road. The landfill was purchased from a private company by the township in the 1970s and shut down by 1979, eventually becoming a federal Superfund site. It was capped in 2012 under orders from the federal government.