Police in Florida suspect Adam Matos, 28, killed the mother of his son, her parents and her boyfriend this week following an Aug. 28 assault for which he is currently jailed as the murder investigation continues.

Megan Brown, 27, and her parents, Margaret and Greg Brown, both 52, are former Brick residents, the Asbury Park Press initially reported Saturday night. Ocean County real estate records obtained by Shorebeat confirmed the family lived at 300 Jefferson Court in the township’s Herbertsville section until Oct. 1998, when their home was sold. 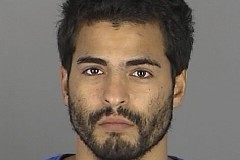 According to local media reports in the Tampa Bay area, the Browns, along with Nicholas Leonard, 37, were found dead Thursday in a field close to the home in Hudson, Fla., where the foursome were living. Matos became a suspect in the case after a 4-year-old boy who is reportedly the son of Matos and Megan Brown went missing after the murder. A manhunt for Matos ultimately came to an end at a Tampa hotel on Friday when he was apprehended by Tampa Police.

Bay News 9, a Tampa area cable news channel, reported Saturday that Pasco County, Fla., sheriff’s deputies went to the family’s home on Thursday to perform a welfare check and found blood, “a projectile” and a foul odor at the home consistent with a decomposing body. The four victims’ bodies were later found in a field near the home, stacked on top of one another.

The toddler, who is said to have autism, was found with Matos unharmed.

As he was being arrested, Matos proclaimed to reporters that he was innocent and that he loved his son.

Matos is being held on $200,000 bail on an aggravated assault charge that dates back to Aug. 28, when he allegedly held a knife to Megan Brown’s throat. He has not been charged in the quadruple homicide.