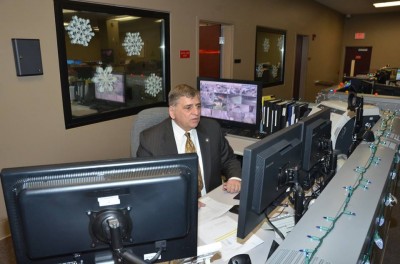 In a photo from Jan. 2014, Sheriff Michael Mastronardy sits at a communication desk at the Ocean County Sheriff’s Department. (File Photo: OCSD)

Ocean County officials have decided on a $22.8 million plan to upgrade law enforcement communications systems and laboratory equipment with the aim of creating a more cohesive system and technology evolves.

As it stands now, the Ocean County Sheriff’s Department, which handles emergency dispatching county-wide and for numerous municipal police and fire departments, runs on a static-laden 500 megahertz system. The distortion in the audio, Sheriff Michael Mastronardy said, is caused by a rule change by the Federal Communications Commission that moved digital television signals to the 500 megahertz frequency and transferred emergency communications to the 700 megahertz frequency.

“It is a safety issue for the officers, plus the fire and EMS throughout the county,” said Mastronardy. “We have situations in the radio room right now where we switch to a new channel, people can’t hear other people, and people get frustrated. This is going to protect them in the future.”


As part of the ambitious plan, new equipment capable of operating at 700 megahertz will be purchased for the county’s six broadcasting towers and five additional towers will be constructed. The upgrade will also include new software that will allow central dispatchers at the Sheriff’s department to communicate with other public safety agencies such as the warrants division, crime scene investigators, the prosecutor’s office, corrections, local police dispatchers and even public works officials – a necessity in an emergency similar to Superstorm Sandy. The new system will include GIS mapping, computer aided dispatch, mobile access in the field and records management capability.

“All of the improvements will happen, if all goes right, simultaneously,” said County Administrator Carl Block.

The plan will also include a new mass spectrometer for the CSI division of the Sheriff’s department which will alleviate a significant backlog that has crept up in recent years as there has been an increase in drug cases, coupled with the slower, older technology included in the current mass spectrometer. A mass spectrometer is a device that can identify molecules in objects or substances such as a drug in order to tell what the substance is made out of.

The backlog peaked at over 700 cases in January, Mastronardy said, but have now been reduced as employees scrambled to stem the tide.

“Phones were ringing off the hook from prosecutors and judges in January,” said Mastronardy, putting cases in jeopardy.

The new equipment will also lead to savings, as about $100,000 of investigative work that is now outsourced can be brought back in-house.

The county’s switch to a 700 megahertz communications system will not leave local communities still on the legacy 500 megahertz system in the dark, as backwards compatibility will be included, said Freeholder Jack Kelly. But the county’s purchase of new equipment will include options for individual towns to switch at a significant discount.

“We are not going to force any municipality to come on board,” said Kelly. “But we’re trying to make it as easy as possible. This will allow the municipalities to either pass their own bond or Motorola will give them financing options of five, seven or 10 years.”

Mastronardy said Monmouth County has already upgraded its equipment and, especially for towns which have neighbors there, be beneficial, especially given the number of narcotics cases agencies in the two-county area jointly investigate.

“One would hope that at the end of this, there will be 33 towns on the system and one single database,” said Block. “Theoretically, you’re looking at a bi-county map of what the [crime] patterns will be.”

The upgrade project is estimated to take about 18 months to complete.