Over 2 Inches of Rain Expected in Coastal Storm, Forecasters Say 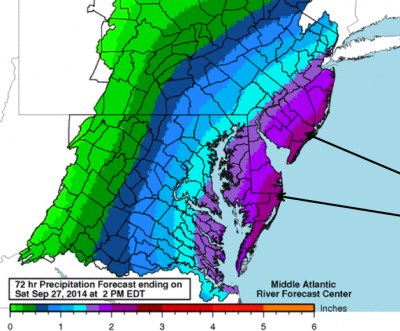 The National Weather Service predicted two or more inches or rain would fall in coastal areas of New Jersey as a storm system moves through Wednesday night into Thursday.

“Easterly winds will gust over 35 mph at times near the coast tonight and Thursday as they gradually turn to the northeast,” the forecast said. Wind gusts could reach close to 50 m.p.h. at times, forecasters said.


Minor tidal flooding is expected along the New Jersey coast during the times of high tide on Thursday, though heavy rain at the time of high tide could make flooding worse, the forecast said. Forecasters issued a coastal flood advisory until 12 noon Thursday, a warning to motorists that roads prone to tidal flooding may be closed to traffic.

Beach erosion is also a possibility with the storm. A gale warning was in effect as well as a small craft advisory. The National Weather Service was predicting seas will reach 8 to 11 feet overnight and during the day Wednesday. The storm was also expected to cause rough surf and dangerous rip currents.