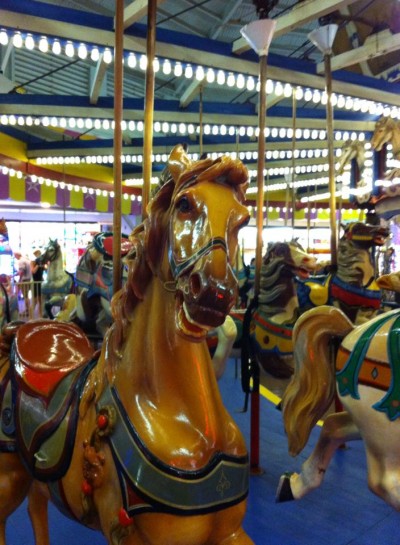 Officials in Seaside Heights have introduced a plan that would keep a historic carousel in the borough in exchange for granting land to its owner.

The Storino family, owners of Casino Pier where the carousel – which includes horses built by William Denzel as early as the 1890s  – is located, will receive municipally owned beach property north and south of Casino Pier in exchange for vacant property located on the oceanfront between Carteret and Sampson Avenues. As part of the deal, officials announced late Wednesday night, the borough will take ownership of the carousel.

Its presence in Seaside Heights will be “ensured perpetually” under the plan, a statement released Wednesday night said.


Casino Pier is planning a “major expansion with the property being acquired from the town,” the statement said, with more details set to emerge in the coming weeks.

Casino Pier’s decision to sell the carousel, which includes 18 paintings atop its center casing, a 1923 Wurlitzer Military Band organ, plus horses designed by Charles Looff and Salvatore Conigliaro in addition to Denzel’s, was forced by “market conditions” at a press event held in July.

Had a buyer not been found, the carousel would have been dismantled and auctioned off piece-by-piece, said Arlan Ettinger, president of Guernsey’s, a New York City auction house that previously orchestrated the sale of the Coney Island carousel.

Reaction was all positive on the Seaside Heights Boardwalk Facebook group after news of the deal began to circulate following Wednesday night’s council meeting where the land swap ordinance was introduced.

“What a great night it is,” posted Peter James Smith, a regular at borough council meetings.

“I rode that carousel so many times,” said Dyan Vilardo Melucci. “Yes, miracles do happen.”

The ordinance will need to be approved on a second vote by the council before it is finalized.